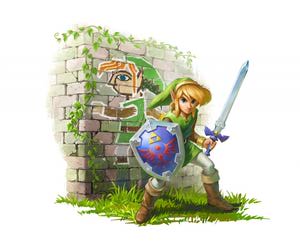 During a New York Comic Con panel Nintendo producer Eiji Aonuma revealed a plethora of new announcements for the upcoming 3DS Zelda title, A Link Between Worlds. The title, as well known, is a sequel of sorts to the SNES classic A Link to the Past. The SNES game contained a setting called the dark world where the game’s main antagonist, Ganon, was sealed away in. It seems A Link Between Worlds will continue the trend of an “otherworld” with a new setting called Lorule.

Lorule mirrors Hyrule and will have it’s own castle and a princess named Hilda. “You may have seen [Princess Hilda] praying at the end of that trailer,” Aonuma said through an interpreter. “Naturally they’re both princesses, and they both have kingdoms, and they’re both thinking about their kingdoms. But they also have different desires (and) different motives each to their own. How those interact and conflict is how the story develops.” A villian was revealed as well called Yuga.“The way that he interacts with Princess Zelda, and in Lorule, Princess Hilda basically is what makes the story unfold, “ Aonuma explained.

The upgrade system also received a few new announcements. Items a player rents or buys from the shop can be upgraded by collecting creatures called Maimai’s. When these creatures are brought to Mother MaiMai, the player will receive an item upgrade. This was demonstrated with a stage demo showcasing the upgraded bow and arrow, which could fire three arrows at once.

Mini dungeons are also in the game and all contain treasures. This allows players to gather rupees as a reward for exploring.

The game will make it’s debut on November 22 in North America. European and Japanese have yet to be announced.