It’s time to learn some XCOM Enemy Unknown as we play and in order to make things more interesting, I have decided to share with you my XCOM Enemy unknown diary with tips and tricks and bits from the campaign. This first episode begins with us already familiar with the alien forces, when we’re looking to build the Skeleton key and infiltrate one major alien ship. Sounds interesting!

But until then, there are things to do, and first of them is to set up the squad. Because of my poor starting strategy, I have already lost a few good men and don’t have many veterans to choose from, but right now I can’t complain as I have a pretty solid squad. Here is my main set-up for the XCOM Enemy Unknown squad:

As you can see, if I have a full squad available, I prefer to go with 2 Assault members, 2 Snipers, 1 Heavy and 1 Support. The Snipers are there to provide lethal shots to the enemies, while the Assault rush in and blast their brains away from close range. The Heavy and his rockets are there to do the massive damage and never give a spit on the harvestable materials of the aliens, while the Support brings in Medkits to… support. This time he got a grenade because he’s a rebel.

And so our first mission begins: we have to save a person close to the council, Mr. Thomas Hutch, who seems to have an obsession of screaming “Hello, I’m here, by the van” despite all the aliens lurking around. But it was easy: the Thin Men poisoned our souls, but were no match for the deadly touches of snipers Zulu Kohler and “Snake Eyes” Klein. Also, assault Mad Man proved that her deserves this nickname by rushing and blasting alien goo all over the place, for the price of 16 days in the hospital bed, surrounded by hot humanoid nurses.

And we have the first unit promoted to something greater than Captain (whatever that is), for our most valued member, sniper Kohler: 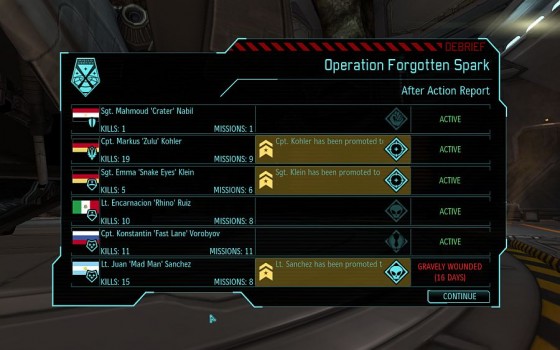 While we scour the planet for alien activity, the Russians decide it’s too cold over there and they want some vests. I gladly offer them the goodies because they give something even more valuable than vodka in return: 3 Engineers. And they’re like liquid gold during an alien invasion! 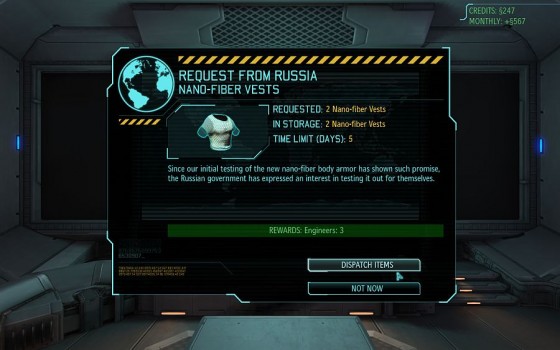 So let’s check out the world map until the next alien invasion happens. Things are not going great. Nigeria is on the point on collapsing, India and France are not doing good either and it’s still many days left until we have the Satellite Nexus building ready and new satellites ready to go. Oh, beginner’s mistakes!

It seems that Russia didn’t put those vests to good use, as they need our help again. Since they’re offering some engineers in return, I’ll gladly help them: 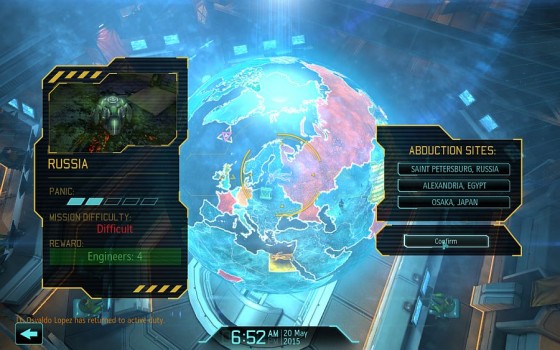 Many cars and very few explosions in this mission that had our Heavy “Crater” Nabil face to face with a Floater that was flushed down the toilet of time with a close shot without even scratching the paint of the cars!

Our snipers climbed up on some trucks and had fun with the rest of the aliens, while the squad overall performed admirably: 8 aliens dead and no casualties on our side. Excellent!

And this is it for the first part of my XCOM Enemy Unknown diary: not the most exciting things happening here, but it’s a good warm-up for what it is to come. We are going to infiltrate and alien base, after all, so there must be a lot of fun there. So see you soon with a new episode. Until then, make sure to build some more satellites!