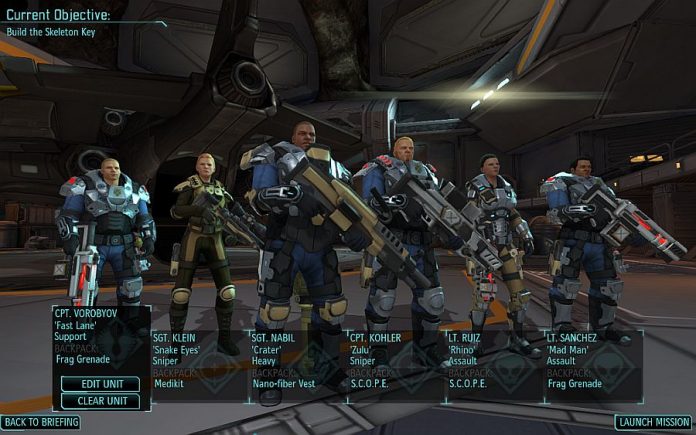 The setup of your squad is extremely important in XCOM Enemy Unknown, at least when you have a choice and you can really choose the squad members that you prefer. During my playthrough, I always realized that if I had a different squad setup for some missions, the outcome would’ve been different (aka less losses). So I have decided to share with you my thoughts on the Best XCOM Enemy Unknown squad setup.

Of course, before we begin, it’s worth noting that we all have different approaches to the game so my setup might not be for everybody. But if you like to play it safe, minimize the casualties and you’re not in a hurry, this might be the best XCOM Enemy Unknown squad setup for you:

Before we talk more about this set up, let me tell you that initially I liked to go with 2 Assault instead of support units, but the fact that they can’t shoot from a range and therefore they’re almost always exposed, made me reconsider this strategy. However, in tight close spaces, I might sometimes switch 1 Sniper with a Rookie or an extra heavy or assault.

First, the Snipers – these are the most valuable members of any team as they get to a point where they never miss. It doesn’t matter that they can’t move and shoot in the same turn – they will usually be immobile, far away from the heat, taking out enemies one by one.

The Assault is usually used to get the aliens out of cover rather than simply assault and go mad. Take the alien out and let the others finish the job. Extremely useful in tight spaces, though, after a pack has been shot down and there’s just one alien left: dash near it and critical hit it to pieces.

The Heavy can’t usually shoot well, but his rocket launcher and grenades always come in handy. Add to that the ability to shoot twice (or shoot and move), and he can become a really great asset (I say “he” because I never saw a female Heavy in the game).

Finally, the pretty controversial choice of having 2 support units in the game: not only that they shoot pretty well, but the smoke grenades also come in handy. Usually, I try to build them so that one can carry 3 med kits (enough for an entire round) and the other 3 grenades (again, enough for one round) and therefore let the others go with SCOPES or vests for increased health. They are great to keep us covered in smoke and also take down the aliens.

And this is it! This is my suggested squad setup, if you have the privilege of choice. Try to mix and rotate early on when the aliens are weak to get at least several upgraded soldiers, otherwise you’ll find it really difficult later in the game when they’re all injured or dead…