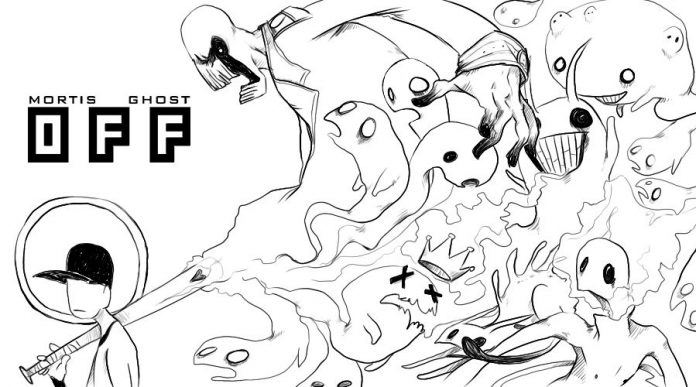 I like to play games on recommendation; I have friends with tastes that are quite different from my own, and doing so opens me up to new experiences (some good, and some bad). Today I played a game that has garnered a great deal of hype in small, social networking outlets (i.e. tumblr or reddit)–the game was called Off and it was developed independently by a ‘Mortis Ghost’ on the widely renowned RPG Maker engine, and playing Off drove me to write a sort of article, not necessarily concerned with it alone, but with this entire ‘sect’ of games often referred to collectively as ‘art games’. Art games have had a bad reputation for a while now: while not confined to any sort of genre-defining characteristics, we all know an art game when we see one. Some art games are great experiences–That Game Company are practically experts in this, with titles such as Flower and Journey  amassing widespread critical acclaim–but there are many, many more less-desirable ones out there that steer audiences away from more predictable genres and franchises (Dear Esther is the first example of a bad art game experience to come to mind, in recent memory). While all of these games may share visual characteristics that earn the label of an art game, the actual content–the user’s experience with the game–sets the legitimate art games aside from their superficial sisters, the ‘artsy games’.

I am at least happy to have gamed through the releases of many games that will be seen as masterpieces, centuries from now, among the works of Van Gogh and Picasso. When I play an art game, I am usually drawn in by such elements as the visuals, or the musical score (Plastic’s Linger in Shadows is a prime example of both), and stay for the engrossing scope of the narrative or gameplay. And while I was interested enough with the visual style of Off, the mere act of taking some of the most boring and broken RPG mechanics ever devised and masking it with a thin veil of nonsensical, pseudo-intellectual dialogue and ‘experimental’ music won’t fool anyone, because the mechanics and pacing &c. are the means by which the player interacts with a game, and these are the flaws that are the most striking.

Not wanting to just leave Off as some facet-less scapegoat for why artsy games are bad, allow me to dredge up an experience I would otherwise wish to forget. The premise is this: you are a ‘puppeteer’ who controls a man named ‘Batter’, who is on a mission to purify a surreal world that you know nothing about. On top of that, you only know that it is your job to make sure he does his job. You don’t know why, it just comes off as you being some kind of cosmic, assistant manager assigned to oversee the most boring aspect of a company. You would not think it would be boring, because his mission is to ‘purify’ malevolent specters with an iron bat and some magic here and there, but, oh-ho, far from it. The game has intrigued us with its visuals, and even the premise sounds interesting, but once you first begin fighting … it all goes down hill. Those who have played Final Fantasy XIII may remember that the combat was mind-numbingly bad, largely due to the use of the auto-attack feature that doe your entire turn for you. Well Off goes one step further: the auto-attack button does the entire battle for you, and after the combat tutorial, I used auto-combat for the entirety of my experience. That is no exaggeration. Every battle was just time to set the controller down and ponder how this game could get any worse. Don’t worry, it is much worse. To be brief, every NPC is supposed to soulless and boring, and they are, but trying to be boring does not mean you are not boring. They constantly spew information about their obscure ‘Zone’ whose industrial structure, economic castes and financial dispositions are of no concern to you, because you’re just here to purify this place, not instantiate governmental reforms! Oh but it’s just trying to distract us from how bad the game is, as artsy games are wont to do; the puzzles are literally running around monochromatic rooms and finding numbers, then going to a keypad and putting them in (at one point, a man would not let me pass unless I told him “How many threes in June?”, and next to him was a poster that said “June” and was covered in threes–better call Scooby Doo and the gang to come solve this one). I could start nit-picking, but we would be here all week.

The existence of artsy games can probably be explained by the fact that game design is more or less an alchemy; this is to say, both an art and a science. Art games realize and master this; artsy games opt to follow the school of art, throwing the actual science of legitimate design to the wind; these are the games that are doomed to rest under the dunes with Ozymandias. Artsy games serve to express some kind of an idea just as art games often do, but lack the finesse of execution. They often turn slow and tedious (one only wishes to press ‘auto’ so many times, and the actual manual combat was just selecting the same options no matter what enemy you fought), and after one hour of Off, I stopped. I was in Zone 1 of 4–I asked my friend who had already played the entire game if the experience was really worth pursuing–if it ever got any better–but in an artsy game, nothing changes but the visuals or the score, not the means by which you enjoy them. He told me that it did not, and I stopped. My experience with this game was finished, and when I closed the application, the nightmare was over. Sitting at my desk, typing this article, has been more riveting than Off ever could be. If there were anything I would want to see changed by this article, it would be that people stop saying ‘Art games are generally bad’ and just acknowledge that ‘Artsy games are generally bad’, and not discount many of our medium’s greater works of art, because they are the games we will want to be remembered by.