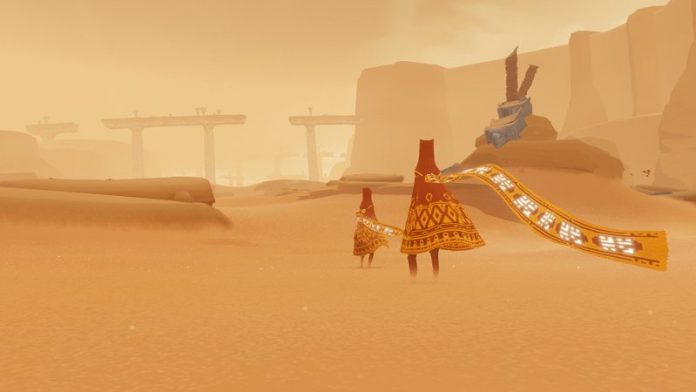 Almost two years have passed since thatgamecompany released its most successful game, Journey. One year now distances us from the release of Proteus by Ed Key and David Kanaga. Both are indie games, both can be finished in less than two hours, and both challenge the assumption of what a video game should be, look like, and play as. In Journey, only two buttons are used in addition to the analog sticks. In Proteus, no buttons are used at all. Neither has dialogue or an explicit story. The vast majority of the gameplay revolves around one simple action: walking.

Compared to the fast-paced and explosively exciting games that are so popular now, Proteus and Journey sound absurdly abstracted from any traditional interactivity. But the final products are anything but boring. Instead, they both delivered to me the most profound emotional experiences I have ever had playing video games. They incited feelings within me that nothing else, not even a cinematic masterpiece like the Last of Us, ever has achieved. But it seemed so counterintuitive at the time. Why should these small, unassuming games have such a huge impact on me?

It all comes down to wandering in unknown and unexplained worlds.

In Journey, the player assumes control of a figure whose only humanoid traits are two legs and a head. Otherwise, the shrouded character lacks any discernible characteristics beyond its brown robe and flowing, orange scarf. Without any prompt or dialogue, the player is then introduced to a beautiful desert of whistling wind and whipping sand. The camera swings forward and far in the distance, a mountain rises. A beam of light shines from the peak.

That is it. Nothing else is told to the player. The destination is obvious, but the journey is what the game is about—hence the title. And throughout this game, the player explores desert ruins, some of which vaguely allude to an ancient civilization, others which could be interpreted to be cemeteries. Huge, mysterious, monolithic structures rise from the sand. Nothing is known of them.

There is multiplayer in this game. Occasionally, without warning, the player will encounter another player, and their two figures can work together to accomplish the environmental puzzles. But, vitally to the game, there is no way of communicating beyond jumps and one sound. Every interaction with the other person is purely physical.

Everything about this game is abstract and ill-defined. Nothing but the destination is truly ever known about this world. The game never reveals the character’s motivation for going there. Who the character is, and why he seems to be so alone so much of the time in a deserted landscape, is left to mystery as well.

All this mystery may seem infuriating, but in fact it is exactly this that makes this game so effective. Instead of imparting a story onto the player, the game allows the player to impart a story onto it. When I was playing, I found myself making up backstories for the character, explaining why anyone would embark on such a long trek to an unknown peak, making up a reason for why the world seems abandoned. And it became my story. It became my world that I trekked through, a world that I helped create. Even when I wasn’t consciously thinking about the story I was making up, my connection with the character grew just because I began to feel the need to progress within myself. No other game has come close to inspiring that level of true motivation to complete a task. I didn’t want to finish the game. I wanted to get to the light on the mountain.

Journey, throughout its meandering two hours, becomes a visible representation of sorts for an internal journey of the player. It is meant to inspire feelings, not to give them. It is meant to bring the player to a deep, personal understanding, not to tell him what to understand. It is a story of life and death, birth and rebirth, and in that moment of death, I felt the loss deep within me. I felt the struggle, the desperation, and the eventual fall. But then, I felt the pure joy of rebirth.

And this is all because there is nothing: no guidance, no text, no speech. It is left up to the player to find his way to the mountaintop. Journey is the personal search of the player for understanding as much as it is the character’s quest for transcendence.

Proteus takes Journey’s concept one step further. Although Journey tells nothing, it still has an obvious goal. Proteus, on the other hand, pulls back even further from the conventions of video game design and has no discernible point whatsoever. It also does away with any character action at all besides walking, and even the character itself is left completely up to the imagination.

Throughout the day, therefore, Proteus is entirely about the wandering. The player walks silently around an island full of life. Birds chirp, frogs croak, wind blows. Vague structures may or may not hint at some past inhabitance of this island. Ambient music swells as the pixel-art plants move in the wind. Bumping into a tree will make a unique noise, as will scaring a chicken, crossing a lake, hitting a post, or walking across different grasses. This is all about exploration, finding the secrets of the island (which is different for everyone due to procedural generation) and, just like in Journey, coming to one’s own conclusions about the story behind the island.

Perhaps my favorite moment during my entire playthrough of Proteus was when I first climbed a mountain. The steep side of the cliff changed from grass to snow, and the cheerful music softened until it was nearly silent, replaced by the rushing sound of wind over a barren peak. At the top, a circle of objects stood. They looked figure-like, and so I decided that they were convening for a religious or spiritual ceremony at the top of this mountain. I decided not to disturb them (even though they do not move) and walked down the opposite cliff face. The music swelled again, and the harsh sounds of the elements were replaced with the melodies of spring.

I was very surprised when I realized that Proteus does have a point, and an end. And throughout the exploration of the island and the progression of the seasons, this end becomes just as much an allegory for life and death as Journey’s. By letting myself become immersed in the world and drawn to the landscape, this end was intensely emotional and personal. It allowed me to make my own story, and as a result I was personally affected by the result of it. I had never experienced anything like it, besides while playing Journey.

For a while, I did not understand the connection between the two games. But it is obvious—what makes Journey and Proteus so unbelievably effective is that they leave the level of investment up to the player. Everything is on the shoulders of the person controlling the character. In a game like The Last of Us, the emotional impact is wrought by the writers. In Journey and Proteus, it is made by the player. Each step becomes a step in a journey created by the player, for the purpose of understanding something for the sake of knowledge. There is no metagame in these games, no achievements or leaderboards or score. There is no dialogue or text. Nothing is explicit. As a result, more often than in any other type of game, the player is motivated to finish the journey for the sake of the journey itself. The character’s experience with the world is the player’s as well, because the player is responsible for every bit of meaning that the world has. It is an incredible accomplishment, and one that is done purely through the beautiful simplicity of wandering.

More developers should take note of these achievements. Simplicity can bring wonder to a game by allowing the player room to imagine. Although explicit stories are often incredible, there is so much room for purely environmental storytelling, and the kind of storytelling that, like Journey’s, encourages the player to write his own explanations. Mystery inspires the player to imagine, which in turn leads to engagement and interest. It is this capacity for player creativity that truly allows Proteus and Journey to shine, and it is this concept that should be explored by many more developers in the future.