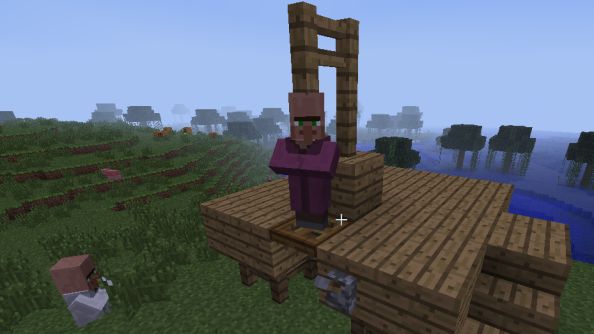 A new update is prepared for Minecraft! Pretty Scary Update is the official name of the more boringly known 1.4 update that’s prepared to hit the Minecraft game on October 24th. The new update will deliver, just like all the previous Minecraft updates, a ton of new content, including an anvil to repair your weapons, evil witches and the second boss mob. No word on Halloween pumpkins yet, but there’s still time.

PC Gamer has created a list with the most important changes and new features to be brought by the Miecraft Pretty Scary update and I’m sharing it with you below:

– A new Command Block has been added, allowing creators of adventure maps to run scripts and create more RPG-like experiences.
– Anvils are being added, which allow you to combine two damaged items to create a single repaired version with the enchantments and combined durability points of both. You can also use it to rename items.
– Wither Skeletons are a new mob type that can spawn in the Nether. Killing them and collecting their skulls allows you to construct the Wither, Minecraft’s second boss mob (after the Ender Dragon.)
– Killing a Wither gives you a Nether Star, which can be used to construct the new Beacon item. Beacons emit a beam of light into the sky, aiding in navigation, and can also be activated by a sacrifice of valuable material to provide a buff. Bigger, more impressive beacons give better buffs.
– Mobs and minecarts can now move through Nether Portals. So…you might want to leave those turned off when you’re not using them from now on. Just saying.
– Night Vision and Invisibility potions will let you be Batman. Or will they? Yes. Yes, they will let you be Batman.
– Witches are being added. They live in creepy shacks in the swamp, throw harmful potions at you, have warts, and weigh the same as a duck.
– Zombies can now infect and turn Villagers. Prepare for the apocalypse.

For the full list of changes expected in Minecraft 1.4, check out the Minecraft Wiki.