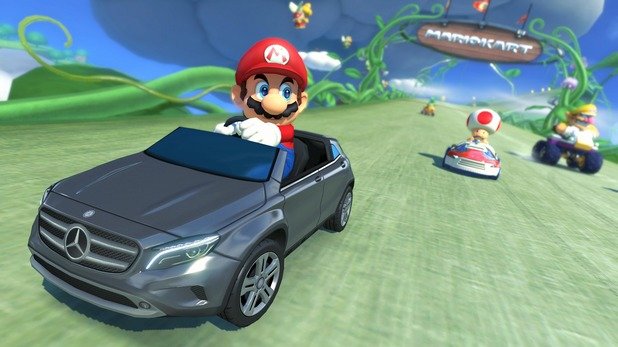 Even before Mario Kart 8 arrives on shelves, Nintendo has teamed up with Mercedes Japan to promote the new Mercedes GLA through free to download DLC for the latest instalment to the Mario Kart series.

When it comes to DLC for racing games, it is extremely common to see the newest, fastest cars creep up as either free or cheap DLC. Gran Turismo had the Bugatti Veyron and now Mario Kart 8 is expecting the Mercedes GLA later this summer.

However the deal between Nintendo and Mercedes isn’t the weirdest combination, that title is held by the advert which was used to announce the partnership.

The video includes a Mercedes some Goombas and unfortunately a live action Mario which will haunt your dreams and force you to choose Luigi when you grab Mario Kart 8 off the shelves.

At the moment the DLC will only be available in Japan, however Nintendo issued a statement claiming:

“As for the information relating to the distribution of the GLA kart for MK8 outside Japan, we will be able to announce in the near future.”

The DLC itself includes a roofless go-kart version of the Mercedes GLA for you to race around and best of all it’s free!

Will you be downloading the Mercedes GLA? Or has a live action version of Mario scared you away from the franchise? Let us know in the comments or tweet me @JonathonAalders