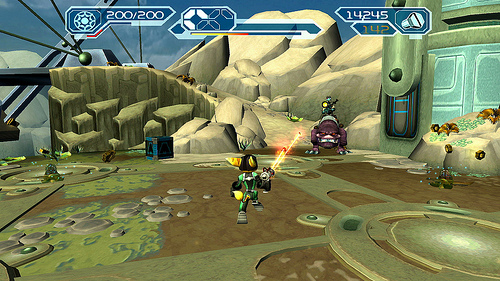 The Ratchet and Clank HD Trilogy will be coming out on PS Vita in July, Insomniac Games has announced.

Released on the 2nd July in Europe and 9th July in Australia, the trilogy will be available as both a download for $29.99 (UK price unknown) on the PlayStation Store as well as in shops. A US release date has not yet been set.

In a post on PlayStation Blog, Insomniac Games’ community lead James Stevenson said: “We’re really excited by how well the PS Vita port of the HD Trilogy has turned out.

“It looks amazing and is a terrific way to play the classic Ratchet & Clank adventures. We can’t wait for you to get your hands on it and take Ratchet with you wherever you may go.”

Featuring remastered versions of Ratchet & Clank, Ratchet & Clank: Locked & Loaded and Ratchet & Clank 3, The Ratchet and Clank Trilogy was released on PS3 back in 2012 by developer Idol Minds to celebrate the series’ 10th anniversary. Each game came complete with a set of trophies to unlock.

Since then, Stevenson said that one of Insomniacs most requested titles was for a version of the trilogy to make its way on the PS Vita.

The handheld version is being developed by Mass Media, Inc. who are perhaps best known for bringing the Jak and Daxter trilogy to PS3 and PS Vita.

What are your thoughts on this series making its way to Vita? What other series would you like to see get the handheld treatment?