The upcoming new champion Yasuo, the Unforgiven, was revealed today by Riot Games and his skills promise to deliver a quick death to those who oppose him. It’s not yet known if the champion will be AD or AP, however everything indicates that he’ll most likely be another AD assassin.

This wind blade samurai has a dramatic storyline, betrayed by his own kind, he now struggles against old allies, who assume he’s the responsible for the death of an Ionian elder. He was one of the few to master the powers of the wind and now he is able to perfectly execute deadly blows that can surprise his enemies. Mobility and agility are his main allies in the battlefield, however he can still be a great support if that’s what he’s aiming for. If you’re not sure about this upcoming character’s skills, click here to check them out.

The Power of the Wind Blows the Feeble Away?

Yasuo is a man of resolve, an agile swordsman who wields the wind itself to cut down his foes. (…) Formerly a brilliant pupil at a renowned Ionian sword school, Yasuo was the only student in a generation to master the legendary wind technique. – By Riot Wenceslaus 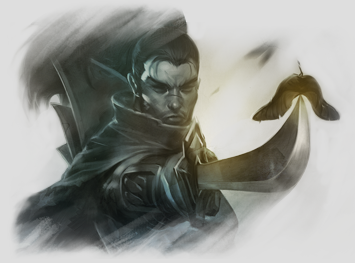 The wind power can de devastating in many ways, it’s an extremely versatile element, just take a look at Janna and you’ll understand. Now, we’ll have a former wind assassin, Yasuo. And he won’t simply be able to kill, he’ll be able to support and protect his team members. Using his Wind Wall, Yasuo will be able to nullify all the enemy team’s ranged projectiles and if he dashes in the meanwhile his Flow will fill up faster. His passive, the Way of the Wanderer, has two distinct bonuses, the Intent and the Resolve forces, the first grants permanent double critical strike chance and the second generates a shield based on the champion’s flow, which fills up with speed.

Now, where’s the killing beast inside this wanderer samurai? The Steel Tempest move, allows Yasuo to damage enemies in a line. If the move is well executed, Yasuo gains stacks, at the third stack he’ll send out a whirlwind blow that will suspend enemy players in the air. This condition, the airborne, is vital to successfully land the ultimate move. The Sweeping Blade can inflict incredible amounts of damage, however when used several times in a row the damage will hit a cap amount. This ability lets Yasuo dash through enemy units as a strong wind blow and it can be used as an escape, I suppose.

Yasuo is definitely the best at disabling his opponents through airborne and his ability to dash and teleport to enemy champions will turn him into a deadly weapon against non-defensive targets, such as AP and AD carries. His ultimate skill (Last Breath) allows him to instantly teleport to an airborne target, then he can suspend and damage all the nearby champions. But that’s not all, after casting his ultimate he’ll gain bonus armor penetration for a while, which means that he can destroy the enemy’s AD carry in a blink of an eye.

Fear not, Yasuo can still be built differently, perhaps as a jungler or top laner, he can be quite versatile and built more towards tanking and supporting instead of pure damage. Nonetheless, there’s absolutely no doubt that this hero is a killer and that’s his strongest role.