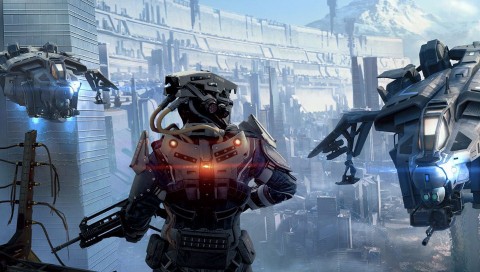 Gureilla Games’ PS4 launch title, Killzone: Shadow Fall, is set to be a whopping 50gb according to Sony UK’s Fergal Gara in an interview with Eurogamer.

“Killzone: Shadow Fall is an uber file – I think it’s cracking on for 50GB. It looks it, too, when you see it”, Gara said.

With such a large internal hard drive the concern over downloading large games through the PSN store has remained a constant worry for many consumers. Downloading games on the PS3 has remained a frustrating task, with some games taking over a full 24-hours to download. Gara notes however that the Play as you Download functionality, a feature the PS4 contains which will allow gamers to play a title while it is downloading in the background, will help remedy these slow download speeds. But the feature will be balanced out by large games files, such as Killzone: Shadow Fall.

“First of all, it is definitely going to grow as a means of consumption, says Gara. And there are big innovations in the PS4 to make it more attractive and more easy gamer wise to want to download. The Play as you Download functionality, for example, means you don’t need the whole file before you go. This is a little bit counterbalanced by the fact the files themselves are getting bloody big.”

Gara concludes by saying that Sony are heavily investing in improving these tedious and overlong download speeds. The process is slow, but Sony are taking the right steps to insure these improvements will be realized.

“It is still a relatively tedious process. We’ve done a lot of work on pre-delivering files, Gara sates. It’s not perfect. It’s not seamless. The file version of the game versus the disc version of the game maybe needs to go through additional QA and additional testing. Some of the problems that have occurred have occurred on older machines, which of course when you go into the next-generation you at least get to reset and start again and everything’s the same age and new. That helps.

“But it’s a major area of focus, Gara continues. It’s a major area of investment. The network will perform better on multiple levels, because it becomes not just a sales or gaming delivery but increasingly it becomes a social network. So it’s got to be a compelling experience on multiple levels. It’s going to be for no lack of investment, for no lack of effort and no lack of intention that things might fall a bit short. But we’re definitely moving in the right direction, and I’m confident when step on and understand its importance.”

Killzone: Shadow Fall probably has the largest games file for any console game to date. Hopefully these investments made by Sony will help improve downloading content.

The PS4 is set to launch on November 15 in North America and November 29 in Europe.