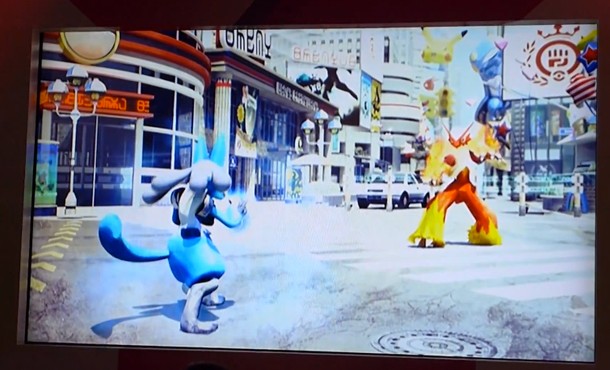 A Pokemon Game Show event is taking place in Japan this weekend, and during the convention a trailer was played showcasing footage of past Pokemon games. Even including the inception of the original trading card game that first made it’s debut in the late 90’s. Apparently, via Gameinformer, the last two seconds of the video gave fans a brief glimpse of the next Pokemon title. The two seconds showed two Pokemon facing off in a city environment.

As you can obviously guess these last two seconds wasn’t enough for fans to making anything of it. But thanks to a NeoGAF post, a single screen shot of these two seconds was leaked. The image details a blue Pokemon on the near side of the screen facing a red Pokemon to the far side of the screen. They are in, what appears to be, a Japanese city. Possibly Tokyo if I were to make a guess. The image also shows graphical fidelity that isn’t quite possible on the 3ds, fueling the speculation that a full fledged console Pokemon game is in the works. This would be a logical move from Nintendo, as they are in dire need of some exciting software for their struggling home console.

As we get closer and closer to Gamescom, we are in full anticipation for what Sony and Microsoft have in store for us. Sony has promised us a great slew of Vita reveals, and a couple of PS4 announcements as well. Microsoft has also promised a new secret exclusive that is ready to be announced come Tuesday. Nintendo on the other hand have given us no reason to be excited and a surprise Pokemon reveal will be enough to keep us entertained. Fans will go wild, and Nintendo will surely dominate the limelight if a Wii U Pokemon game gets announced.