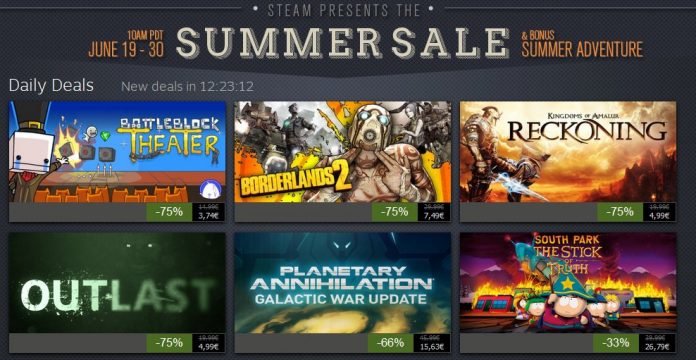 It’s that glorious time of year once again. The time when all PC gamers regardless of their tastes and preferences can gather together for one unified cause: the Steam Summer Sale.

Yes, it is tempting to boot up your Steam program and see just how crazy the prices are for games you’ve been waiting to play, but there are certain ways to go about navigating a Steam sale, and these guidelines can save you even more money in the long run. Plus, you might actually play the games you buy too.

Tip #1: Don’t Buy Games You Don’t Plan on Playing Within a Week

This is how backlogs are formed: you find a great deal on a game that you wouldn’t play otherwise and buy it, only to forget its existence after a week or two. To avoid this pitfall, try setting a budget of how much you’re willing to fork over to Steam and only buy games you are interested in. Plus, if holding off on that one game you don’t have time to play right now ends up being cheaper down the road during Steam’s Winter Sale, you win in the long run!

Tip #2: Keep your eye on the Flash Sales

These sales cycle out every eight hours and usually have the best deals of the sale. 70-80% discounts are common Flash Sales, and as long as you keep track of when games go on sale, you can save money by holding off on games that could go for 30% off one day, but would have a Flash Sale for 80% off the next day. It’s all about patience and playing the mind games of the Steam Summer Sale. Avoid the measly 10-40% discounts in the Daily Deals, as it’s only a matter of time before that one game gets that 50+% discount.

Tip #3: Game Bundles are an Excellent Value, Depending on What Games You Want

Want buy everything game publisher Valve has made, including Half Life, Portal, and Counter Strike for a killer deal? You can buy all 24 games for $49.99 during the sale compared to $99.99. Steam bundles that sell you games and DLC in bulk for half price or more are a great deal to take advantage of. I myself purchased an XCOM bundle with 2012’s Game of the Year candidate XCOM: Enemy Unknown and The Bureau: XCOM Declassified for just $8.49 (regular price $49.98). But if you aren’t exactly on board with owning the Left 4 Dead games or the various Half Life multiplayer expansions in the Valve bundle, you’d be better off buying only the games you want separately.

Tip #4: Make Sure Your Computer Can Run the Games You Buy

A mistake that I am all too familiar with, studying up on what graphics card your computer has installed and how much memory you have can make the difference between a deal and a waste of money. Check which games are graphics-intensive, like The Witcher 2 or Crysis, and make sure your system has the right parts to handle them before jumping on a deal. Mac and Linux owners should also be careful about game purchases as to which games run on their operating systems.

Tip #5: Daily Deals Carry Over Into the Following Day

If you forgot to pick up a game you had your eye on or simply forgot to check Steam the day before, deals from that day are still valid for another 24 hours before a new batch of deals cycles in. It gives some extra time to contemplate/research on games that are discounted.

If PC gaming is a new venture for you, there is no better time to jump in than during a Steam sale as there are a plethora of deals to fill up your gaming library. Just try not to go overboard, for Steam sales are not for the faint of heart i.e. a gamer trapped in an endless backlog of unfinished games.