One of the biggest changes in Football Manager 2013 is the way training works. The training system has been completely revamped and I am here to share with you a guide to training in Football Manager 2013 – to help you understand how it works and what schedules you should set for your players. It is a lot easier than how schedules worked in previous versions of the game, but it does take some time to understand and set up for the first time.

So let’s start with this guide to training in FM 2013!

There are two types of training in the game, starting this season: first, we have the general team training and match preparation and then we have individual training which allows us to focus more on developing players individually.

First, we’ll talk about the team training in Football Manager 2013, which is accessed from the squad’s training option:

As you can see in the top bar, we have the General Training section, which allows us to select the focus of training for the team. We can set it as a default or change it on a weekly basis, using the calendar below. From my experience (2 seasons into the game), there is no point in altering the training on a weekly basis.

Let’s see what are the General Training categories in Football Manager 2013, with a bit of details about the not-so-obvious ones:

– Balanced (a bit of everything)
– Fitness
– Tactics
– Ball Control
– Defending
– Attacking
– Team Cohesion (helps the team work as a… team, players gel up and understand each other better)

So how to set the general training in Football Manager 2013? Of course, any manager can have a different opinion, but here are my suggestions:

– Fitness training should be used on heavy or very heavy for most part of the pre-season to get the players ready for the season ahead.
– When there are two weeks left (if you have signed a bunch of new players), switch to Team Cohesion, to help them gel up and integrate faster
– Then, as soon as the season starts, switch to Tactics as it helps them learn your tactic faster
– For the rest of the season, it’s up to you to decide: probably the best call would be a “Balanced” general training since it goes for a bit of everything or keep the Team Cohesion longer if the players still don’t play good as a team

Next, if you look at the screenshot above, we have the intensity bar. Usually, it’s good to keep things on High (some players will complain, but it’s OK) unless they get very tired. If you see that your players are really tired, switch to Average or Low.

Match preparation remains the same as in FM 2012, it just changed the place where it’s at and it makes it easier for us to manage it. The nice thing is that we can also choose the rest days for the squad before and after the game. I suggest that you only give them a rest day after the game, but if they start to get tired or a very tight schedule is approaching, you might want to give them a free extra day before each fixture to help with their condition.

About the match preparation, things are the same: during the pre-season keep the Teamwork selected all the time to help the squad gel. Then, before the fixtures select from Def. Positioning (increases the defensive stats) or Att. Movement (offers a bonus to the attack) depending on the team you’re playing. I usually play with a poor team, so my default is Def. Positioning. If you’re Real Madrid, you might want to change that to Att. Movement for the extra bonus in attack, as if you’d need it.

And finally, we have the scheduling: how much time we spend with the Match Training and General Training. Personally, I didn’t notice any difference in the performance, so set it as you please. 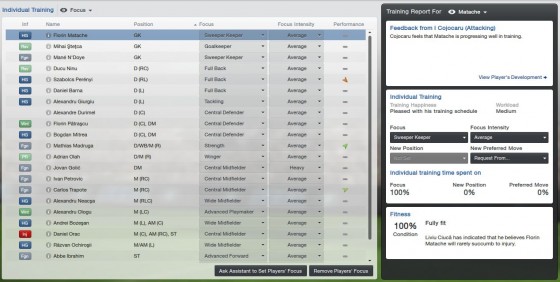 In this year’s game, apart from the General Training, we also have the individual training which allows us to set up each player’s focus on the training pitch. In order to access it, simply select the “Individual” tab under Training.

We basically have two types of focuses here and we’re talking about each of them below:

Specific Attribute: If your winger has poor Stamina, for example, you might want him to improve it quick. Set the specific attribute training to Stamina and see it rise fast. The same goes for any other skill that you want to see improved dramatically (even though a player can be maxed out!)

Additionally, after selecting a player, we can instruct him to learn a new preferred move or position from the sidebar to the right.

So how to deal with individual training in FM 2013? My advice would be to focus on the player role training because you don’t have the risk of training an already maxed-out stat and therefore waste time training it. Also, I would decide against letting your assistants manage the individual training because they tend to train the position the player is best at, and not necessarily the position he plays in your setup.

So this is it with the guide to Football Manager 2013 training. It take a bit longer to set things up at first, because of all that individual training settings, but afterwards it’s pretty easy to manage and I really hope that you found this guide useful!