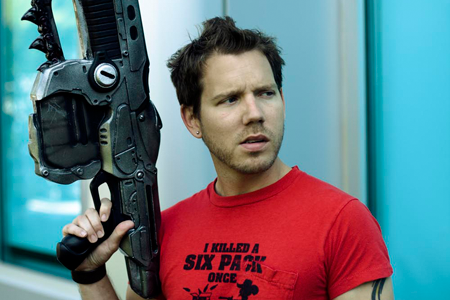 The virtual reality headset Oculus Rift and Valve’s newly announced Steam Box will define next gen, that is according to Gears of War creator and former Epic Games design director Cliff Bleszinski. In an interview with alistdaily, Bleszinski said he is more interested in “disruptive” technology than traditional platforms.

When asked what will define next-game gaming Bleszinski answered: “Things like the Steam Box and the Oculus Rift, honestly. “I’m friends with a lot of folks in Microsoft. Microsoft has been very good to me throughout my career. I’m friends with the folks at Sony. But when I think about my gamer instincts and where I’m going to see a lot of the most disruptive and innovative gaming I don’t see it in the $250 million budgeted game that cost $100 million to market.”

“I was more excited about playing games like Gone Home than any console release. I am thoroughly excited to dive into Grand Theft Auto V but it’s sitting on my desk looking like War and Peace to me right now,” Bleszinski said. “I’m going to have to clear out a good two weeks of doing nothing in order to just deep dive into it. In the meantime I’m on my Nintendo DS and I’m on my laptop playing Steam games. I got to fire up Two Brothers and I finished Thomas Was Alone and Gone Home.”

Bleszinski still plans on purchasing both the PS4 and Xbox One, despite his interest in more “disruptive” technology.

“I don’t know if it’s because I’m rubber banding and rebelling against my AAA background, but I will buy a PlayStation 4 and an Xbox One,” he said. “Am I more excited for that than the Rift and Steam? I think Sony and Microsoft are going to do just fine and it’s a known entity. A known entity is not that exciting to me. It’s the disruptive things that are exciting to me.”

Despite his love for the Oculus Rift, Bleszinski still thinks the headset has a lot to improve upon, but he ultimately believes it has the potential to become it’s own platform.

“The thing is, it’s not perfect yet. There are so many things that need to be solved with VR in order to truly make it work, Bleszinski said. And with each issue that they solve, whether it’s latency or the angle at which it rotates, it gets better. The amount of people who can’t experience VR and get in reduces it quite a bit. They know what they’re doing over there (at Oculus) and I think Rift could eventually be its own platform. Putting Team Fortress 2 and Half Life on it is a mistake. The experiences that are going to be the best ones are the ones that are custom made for the pacing of that kind of experience. I got more excited by the trailer for EVE Valkyrie on the Rift than anything I saw at E3 this year.”