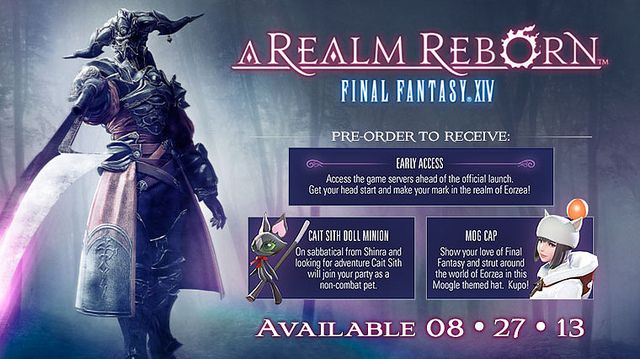 Following the events of the initial release, Final Fantasy XIV is rising from the dead with a complete makeover. A post on playstation.com today revealed that August 27th will be the release date and that they are offering a collector’s edition that comes with a slew of in game items. Personally, I had a very terrible time playing Final Fantasy XII and by the looks of it, the initial release of XIV was reminiscent of that as well.

Overall, I really wanted to give Square Enix kudos for going back to the drawing board and taking another stab at the game. That really shows that they are listening to their fan base. I feel like there have not been many good MMO’s following the destruction of Star Wars Galaxies. Many, like Star Wars: The Old Republic and The Matrix Online, are not developed well and always seem to flop. Seeing more companies learn from Square Enix could bring about more interesting and balanced MMO games.

If you are interested in picking up FF XIV, all of the information can be found at this link. It is strictly going to be for the Playstation 3 for now, but I am sure they would consider adding it to the Playstation 4 roster if it does well. I am hopeful in seeing a fun MMO on consoles in the near future. It might end up being The Elder Scrolls Online, or for all we know, Final Fantasy may end up stealing the spotlight.