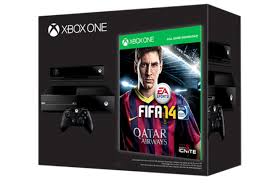 Microsoft has confirmed that it is only Xbox One Day One Editions pre orders will receive a free copy of FIFA 14, despite some conflicting tweets from the Official Xbox Twitter account which claimed that all pre orders would get a download code for the game.

Clarification on this mix up has been dealt with by Microsoft social marketing manager Graeme ‘AceyBongos’ Boyd, who posted on Twitter: “Had a few questions on this so wanted to clarify: FIFA 14 will only come free with Xbox One Day One Edition pre-orders, while stocks last.”

He followed this up with: “If you have already pre-ordered a Day One Edition Xbox One, or pre-order one from now on while stocks last, you will receive FIFA 14 free.

“Another important note – the Day One Edition Xbox One FIFA 14 offer is valid in Europe, this holiday, while stocks last.”

He later joked if you did not want FIFA you could just give it to a friend, thanks to the changes made to Xbox One’s pre owned policy.

The majority of retailers in Europe have sold out of the Day One Edition, including Amazon. You can however, still pre order it at GAME, which has it in stock for the time being. It looks as if it may not be around for too much longer. This edition, which is the same price as the Standard Edition, includes a commemorative controller and a token giving you access to an exclusive achievement. I’m not kidding there.

The Xbox One will see release sometime in November, with an exact date still to be announced.