Risky marketing campaign we’ve got here from Bethesda for the upcoming hit game Fallout 3: some pretty creepy ads posted all over the Metro Center subway station in Washington DC. Why I say they’re creepy? Well… as you can see in the pictures here, they’re presenting a huge Washington Monument in ruins!

Following the attacks that took place seven years ago and everybody wants to forget, it’s a pretty strange decision to go for such a marketing campaign. Hopefully this will not back-fire, since Fallout 3 really promises to be a huge hit and it would be sad to see it ignored because of some non gameplay related stuff.

However, there is an impact, as the Digital Metropolis reports: “In the four minutes I had to waste while waiting for the metro to come, I counted 37 people walk by, stop, and stare at this ad. For those who don’t know, Fallout 3 takes place in a post-apocalyptic DC, and word on the street is that you can play down in the metro tunnels in addition to roaming the streets. Anyway, the crumbling Washington Monument and mutated American flag caught a lot of eyes, and people STARED.”

Let’s just hope that nobody will feel offended and everything will go on smoothly. The marketing campaign itself, as well as the images are pretty well done. Let’s just hope they don’t seem “too real”, though! 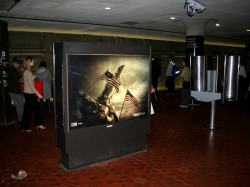