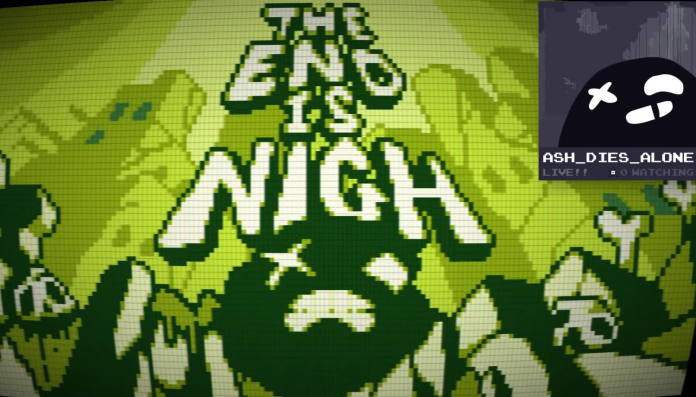 Edmund McMillen, the creator of big indie hits like Super Meat Boy and The Binding of Isaac has shown off a teaser trailer for his new game The End Is Nigh! today. You can watch the trailer right here:

Firstly, you can really feel the McMillen vibes from the art style alone. The teaser trailer opens up with what seems to be a parody of a streamer/let’s player playing the game in question. The player who goes by the name of “ash_dies_alone” gives a short description of the game like any streamer would, then hops right in. The game is a 2D platformer with an emphasis on precision speed. Sounds familiar?

After some impressive jumps, the streamer slips up and lands on a spike, prompting the game to bug out and crash. Ash_dies_alone freaks out – who by the way is voiced by Rich Evans of RedLetterMedia fame – and curses the situation into hilarious oblivion. After attempting to blow in the cartridge like an old NES game to no avail, the trailer then cuts to actual footage of The End Is Nigh!

So at first glance we wouldn’t blame you if you thought this was a sequel to Super Meat Boy. The main character is bringing back Gish memories, another game that McMillen worked on. Other than though, this is straight Super Meat Boy platforming fun. The game moves at a relatively fast and smooth pace, and there’s a lot of precision platforming involved. You can even wall jump as expected, but there seems to be a slight change to that. During 1:27, it looks like you can wall jump straight upwards now. An interesting change!

What are your first impressions of the game so far? While we’re definitely not complaining about more Super Meat Boy levels, it does look a little too similar. This is just the first look though, so we’re expecting some big game play differences to be revealed in another trailer. The game launches on Steam July 12th!