The Witch of the Wilds is finally coming back after the exhilarating events of Dragon Age Origins. What was a simple rumor became a true detail with the Inquisition’s trailer displayed at E3 this year. It seems that the Templar Order won’t have any rest for a while. The mage revolution is already a broad menace with the demon truces and blood magic but in Inquisition, the mage faction will receive an even greater weapon, Morrigan, a shapeshifter sorceress with knowledge of ancient spells that will most likely use her archedemon-spirited child to fight in the utmost battles to come. The faith of Thedas will lay in players’ hands, however it seems that non-playable characters like Morrigan will have a decisive role in this perpetual conflict between mages and templars. But the real question remains. What’s Morrigan’s main purpose in the upcoming game? What will be her true mission and intentions? It seems clear to me that Morrigan will aid mages, no matter their methods. She despises templars and everything that surrounds them; in fact, she doesn’t seem to sympathize with the civilization concept that much. She is also able to summon blood magic without having to deal with demons, dodging any forms of demon possession (an extraordinary benefit coming from her mother, Flemeth). Basically, Morrigan has every motive to fight with everything she has to make sure that no mage will ever be enslaved again.

Freedom has been a very prized value for her and she doesn’t mind being an outlaw, as in an apostate, as long as she can keep her liberty. But is that all? Will Morrigan fight just for her freedom and the freedom of other fellow mages or will she go further and try to establish a world led by mages? Will she get blinded by greed and power? It’s a possibility. There’s absolutely no information about Morrigan’s plans regarding her child, what’s known however, is that this newborn has the soul of a god and it will most likely have the strength of one. The fifth blight may be gone but perhaps a new form of “blight” is arising from the deeps of the fade. The destruction is imminent and the future of Thedas is uncertain, as long as this madness doesn’t meet its end, as it was revealed in the trailer released by Bioware at E3. But Morrigan was always a logical and sensate woman, she doesn’t tolerate soft speeches and foolish acts and she never liked to help others with no gain, unless of course, it included the end of the world. And this might be another case, if she doesn’t interfere, the world will never be the same again or worse, it won’t be at all. Her final words in the E3’s trailer evidenced this exact concept:

“Darkness closes in. Will you stand against it? Or lead this world into its bitter end?” 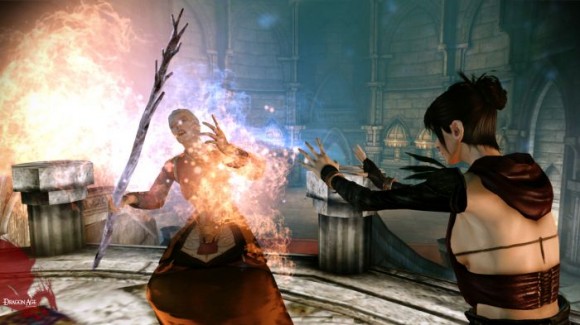 I do believe that Morrigan will assist the mage faction, at least at the start of Inquisition’s plot. However, she will understand that blood mages are merciless and unworthy of her skills, they don’t want to simply annihilate templars, since they’re not able to restrain themselves; they eventually become tools of evil commanded by demons themselves. And Morrigan is not imprudent, she is intelligent and wise, which makes me confident about her intentions, she won’t be the prophet of the mages’ revolution, she will not conduct the “world into its bitter end”, she will instead, save Thedas from its inevitable destruction. And perhaps, her child will be the key towards peace and the ultimate solution for this war.