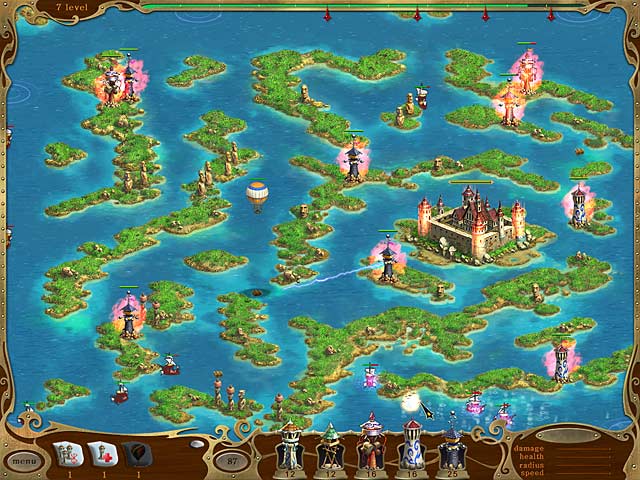 I don’t think that I ever saw a tower defense game released over at Big Fish Games and I was really pleased to see Island Defense, probably the first tower defense title available for download from the casual games portal. Now let’s see if it is also a quality one or a game you should run away from.

The story of Island Defense is really simple: The Dark Fleet has launched an all-out attack against the seven Citadels and only you can defend them! Use the knowledge of the Ancients to construct towers to repel the Dark Fleet’s forces. Protect the land and destroy the invading force in this exciting Tower Defense game!

Basically, it offers everything a tower defense game has to offer: different types of towers to place on the map, various routes that they can take and overall a great deal of fun for the fans of the genre. I must admit that I really liked the idea of everything taking place on an island and enemies come by the way of the sea – it’s a nice touch.

So overall, Island Defense delivers everything you can ask for from a tower defense game: not more, but not less so in the end I’d say that I would recommend this new title to everybody who likes to play a solid TD game. So head over to Big Fish Games and download Island Defense.