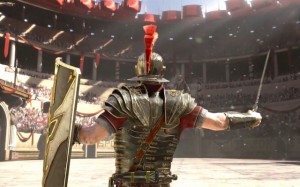 The Call of Duty: Ghosts 1080p vs 720p debacle has been plaguing the web for a good part of two weeks. Crytek, the developer behind Xbox One’s upcoming launch day exclusive Ryse: Son of Rome, has spoken out about the topic. In an interview with OXM, Ryse’s game design director PJ Estevez stated that no matter what generation of platforms a studio is developing for, there will always be technical hurdles that have to be overcome. Esteves revealed that Crytek has it a little easier than some developers because of their close relationship with Microsoft.

“Definitely,” he says. “I mean honestly, the truth is, it doesn’t matter what generation you’re developing for, you’ll always have constraints. And I think, you know, the thing we were fortunate about is we had a great partner in Microsoft in getting the hardware, and kind of really digging into it, and having a back and forth dialogue.”

Ryse: Son of Rome does not run on native 1080p, the game runs on 970p and is upscaled to 1080p. But Crytek boss Cevat Yerli stressed that their isn’t a huge difference between the resolutions, and that this lower res allowed the studio to work on other aspects of the game instead. Estevez meanwhile reiterated that this was the best approach Crytek could have taken with Ryse.

“I think Cevat released some technical reasons why we did the things that we did, but I mean, when it comes down to it, every project has their own cross to bear, and you’ve got to figure out what you want to do and what’s the best way to use the tech,” Estevez went on.

“We were really fortunate, we had a great partner, so whatever curve balls we had, we saw them coming well before they actually hit us. We kind of joke that it’s like landing a plane on the runway as you’re going down and your engine is on fire and the fuselage has holes in it and stuff like that.”

Xbox One will launch on November 22.