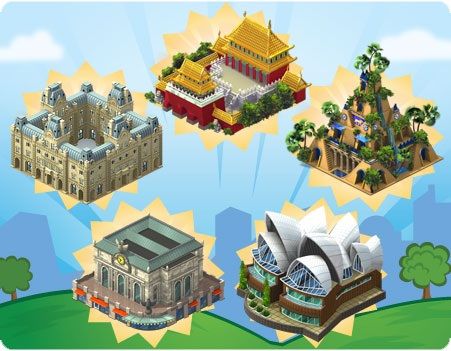 Zynga seemed to have forgotten about the Wonders in CityVille, but it was only because they were working hard at the release of a bunch of new wonders at the same time. And the time has come for us all to see it with the release of the Wonder Crafting feature in CityVille – read on this guide to learn everything about this new feature!

Basically, it means that five new wonders have been released to the game and this time in order to build them we will need to collect blueprints. The new wonders are also introduced by a new series of goals, simply named Wonders of the World, which challenge you to perform actions related to the wonders themselves and reward you with some much needed blueprints.

The first of five new wonders in CityVille that you can start building is the Pacifica Opera House and after starting to work on a new wonder, you won’t be allowed to start a new one for 7 days, even if you complete it.

There are three types of blueprints that have to be collected (white, red and green) and you can get them from your neighbors or as random drops when you collect from buildings.

So start working, there are a lot of wonders to add to your city right now and if you start right now, you can have them all ready in 5 weeks!