Millionaire Boss is a new Facebook game that’s gaining quite some popularity lately, so we’ve decided to check the game out ourselves and, from the title of this article, you can understand that we’ve liked it since we’re inviting you to play as well!

Millionaire Boss is a micro management game created by Digital Chocolate (the folks behind the popular Millionaire City Facebook game) and, even though set in an office, is very similar in concept with the aforementioned game.

Your role in Millionaire Boss is to manage your company: hire people to fill different job positions, hire managers, decorate the office to keep the workers happy and boost their work rate and, of course, make a lot of money for your own good and to become better than your competitors, especially the evil Lucinda. So the 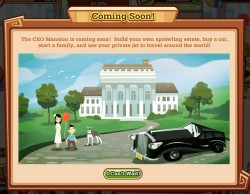 gameplay is pretty simple: you build offices and give tasks to people (which last from 1 minute to a couple of days) and collect them once they’re done. And that’s mostly it for a fast paced, fun game. Of course, you can fill your office with decorations and boosts to increase the happiness of the employees and therefore your earnings.

The not-so-nice thing is that Digital Chocolate kind of wants you to spend your Facebook credits on anything and everything and you’ll be tempted to do it if you don’t have many neighbors – but personally I would suggest adding the neighbors to save some money. It indeed doesn’t seem much to spend one Facebook credit to fill in a position that could’ve been filled by a neighbor, but if you add one here and one there, after some weeks of playing your wallet wouldn’t be so happy.

The game is especially attractive because of its promised “coming soon” content: the CEO Mansion, where you will be allowed to build your own estate, buy a car and even start a family! And this sounds really amazing and a welcomed change to the repetitive (yet fun and rewarding) gameplay of Millionaire Boss.

If you want to try the game for yourself, head over to Facebook and give Millionaire Boss a try.