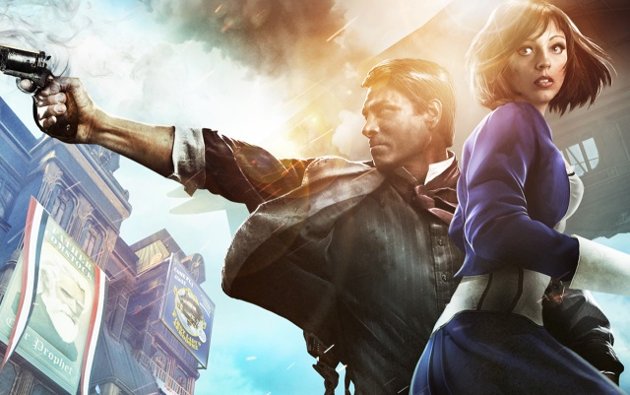 BioShock Infinite was just released and a feverish frenzy has immediately emerged from mainstream gaming media. The “highest rated game of the year”, stated by 2K Games, has been scoring top rankings all around the globe. In fact, I have seen very few reviews that rated the game with lesser scores, which is particularly strange. Is BioShock Infinite as good as media claim it to be? Or is it mostly an act of speculation? There’s a third option; it could be the result of the intensive mainstream propaganda that has been striking the gaming public in the past months, creating high expectations about an object that has been barely experienced so far. Whatever may be the reason for this massive over scoring, the question arises: Is BioShock Infinite really that good?

2K Games’ president, Christoph Hartmann claimed that “2K and Irrational Games are committed to bringing players experiences they cannot find anywhere else” and Bioshock Infinite is no exception to this rule or at least it shouldn’t. However, after playing the game I can’t find anything new or unique that can’t be found in another title. The graphics are stunning and very detailed; the plot is indeed fascinating and uncommon but there’s many soft spots and forced events; the combat is more than ordinary, the main character, Booker DeWitt, collects several steampunk weapons from enemy corpses and uses them in a traditional way; besides physical power, there’s a chance to use magic through potions that proportionate different virtues, such as barriers and possessions, but once again it’s a known feature – in other games you have magic spells, special abilities and fictional powers. I must admit the game has some interesting features; one of them is the interface and overlay display, which mixes the retro western style with steampunk but that’s no real reason to praise a game. The second one and probably the greatest feature of the game is Elizabeth’s artificial intelligence, which I found quite astonishing; she behaves as a real partner, having self-will, self-intelligence, self-protection and she’s still able to act as an advisor and support character most of the time.

So, if the game appears to be just another gaming piece, why exactly are the gaming media giving extremely high scores to BioShock Infinite? There are several explanations for this mass media event, which involves speculation from content producers; high prospects from the fan side and finally, the game itself that presents a fine story with an unusual theme and I.A. improvements. All those factors together created a substantial sensation that Infinite is a perfect game, a must play, when in real it is not. One of the main reasons for my opinion is based on the fact that you can’t give a maximum score to a first-person shooter game when the combat system is ordinary and there’s simply no innovation. A FPS is all about action, combat features and thrilling events, while Infinite focus on a mysterious adventure, an enigmatic city and a supernatural girl. Mixing gaming genres is not always a bad idea but in this case, things start to get really ambiguous, you know you’re fighting to save a girl in order to clean your past debts but eventually you enter in a mist of reincarnation, unveiling your previous life and everything seems possible, you can change the past and the future; the decision is ultimately yours. Action is put in a second plan, which in my opinion is completely senseless in a FPS. The story is very deep, dramatic and it stimulates reflection about life itself, including other perspectives about life and death. Infinite is surely a game you won’t regret playing – the narrative is notorious, the graphics are fabulous and the gameplay is decent. I do think the game is good, but not good enough to break the ranking’s scale all over the world.