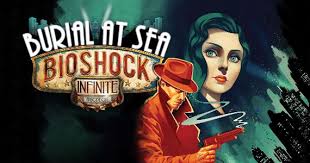 Irrational Games has confirmed on Twitter that Bioshock Infinite’s long awaited Burial at Sea- Episode 1 DLC will be released for PC, PlayStation 3 and Xbox 360 on November 12th.

The DLC sees Infinite’s lead characters Booker and Elizabeth swapping Infinite’s floating sky paradise of Columbia, for the deep sea spectacle of Rapture, the original setting for the series, on the eve of its demise into chaos.

“Burial at Sea- Episode 1 shows Rapture as you’ve never seen it before,” says Irrational, “A shining jewel at the bottom of the ocean, built almost entirely from scratch in the BioShock Infinite engine.”

“Explore the city when it was at the height of its beauty, meet some old “friends,” and make some new ones, all through the eyes of Booker DeWitt. Why are Booker and Elizabeth in Rapture? What was the city like before everything fell to pieces?”

The DLC has apparently modified the gameplay slightly so that players get that original Bioshock feel to the game, whilst keeping some of Bioshock Infinite’s gameplay into the mix. It is promised there will be new weapons, Plasmids/Vigors, Tears, Sky Lines and most exciting of all the return of the formidable Big Daddies.

Burial at Sea: Episode 1 will be priced at £9.99, or £15.99 for the Season Pass which includes both episodes of Burial at Sea, the recently released wave based combat DLC Clash in the Clouds along with the Early Bird Special Pack which included weapon upgrades , gold weapon skins and additional infusion bottles to help upgrade your character.

If you cannot wait for the DLC (and don’t mind a few mild spoilers), take a look at the first 5 minutes of the DLC, which was released earlier this month by Irrational. Personally, I cannot wait to sink my teeth back into Infinite, and of course back into Rapture.