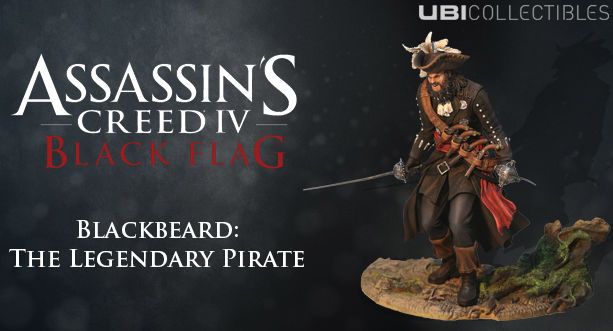 Ubisoft have announced that fans will be able to get their hands on a collectible Blackbeard figurine via the company’s online store.

In addition to the physical figurine, those who order the statue will also recieve a code that allows them unlock digital content. This content takes the form of Blackbeard’s Sails, Black Bart’s Sails and Hornigold’s Sails, allowing players who are so inclined to customise their ship. The digital content is fairly sparse, so it seems its more of a bonus for those who want the figurine than an incentive to buy it.

Blackbeard is intended to be one of the many famous pirates that players will meet in Assassins Creed IV, and according to early news on the title, players will befriend the man as the game progresses.

In addition, Ubisoft have also released another trailer for the game. Unfortunately there’s not much gameplay on show, with the video instead opting to emphasise the historical setting in which the piracy of Assassin’s Creed IV will take place.

The Blackbeard statue may be preorded for $50 from the Uplay store. Assassin’s Creed IV is slated for release in late October.