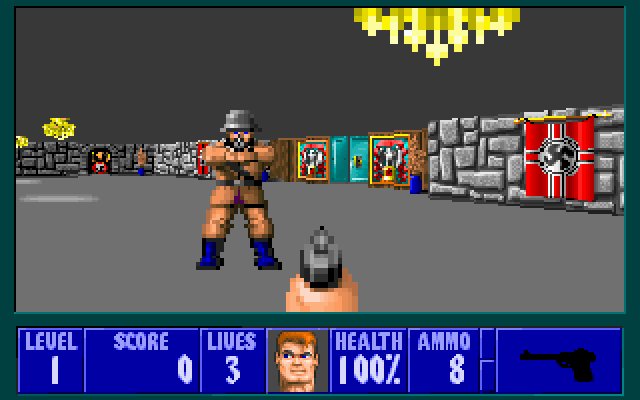 It has been a staggering 22 years since Wolfenstein first hit the market in May of 1992, and with the release of Wolfenstein: The New Order it continues on. Recounting the impact of the series only seems fitting for the continuation of a revered franchise and arguably one of the most important FPSes ever released.

22 years. Dwell on that number because it might not have been the first first-person game made, but it was certainly the most important first person game ever created. While not the seller Doom was, Wolfenstein 3D brought the FPS genre to a wider audience, and put id Software on the map for the first time. The game was simple as most games were in that era, though it added flavor to the otherwise simplistic gameplay. There was only so much a game could do, so objectives were always straightforward: go through a floor until you reach the exit while staying alive. At the end of each episode was a boss and then repeat the same process throughout the next episodes. Added into the game, and a unique idea at the time was the inclusion of secret areas that can be opened throughout each map, with some secrets containing exits to otherwise inaccessible floors. While finding the secrets was a challenge in of itself due to the graphical limitations present stumbling across them was satisfying. It’s a feeling of accomplishment when you hear that stone push inward to reveal a crevice containing score and ammo. While the score really did not matter and I never found anyone who even cared for it the ammo was always a welcome sight especially on the harder difficulties. In fact the score felt like a holdover from an era where each game had to include one before id completely ditched the idea with their next shooter, Doom.

There wasn’t much variety in the weaponry with four weapons in total, including one knife and three bullet guns. Everything shared the same ammunition so the player never feels compelled to cycle through the weapons in order to spice up the potential monotony as each upgrade was head over heels better than the previously used gun. Using a weaker gun made enemies more challenging but it doesn’t make things more fun, however the lack of weaponry can be attributed to the limited capabilities enforced on the game.

Wolfenstein 3D when played today feels like a game stuck in between eras, still finding a way to break away from the late 80s early 90s high score arcade style shooters that littered the industry. Though even if the game itself felt conflicted one can’t help but feel nostalgic when running through the blue stone corridors and blasting Nazi’s away with your chaingun. Despite the conflicted nature of its design, it was wildly successful, both conflict and success would remain a staple of id games. Success was a double edged sword at the time, as the United States was still debating the morality of violent video games such as Wolfenstein 3D. Seen as nothing more than a child’s hobby it frightened parents and politicians alike and even led to Congressional hearings and the creation of the ESRB. Wolfenstein 3D would face harsher dealings in Germany as the country banned the game from being played by legal means due to the Nazi enemies and imagery. In fact to this day, 22 years later it remains banned, the first taste of anything Wolfenstein related coming from the hidden levels of Doom 2, in particular the Doom 3: BFG edition remake which removed any mention of nazis which ultimately felt like a neutered experience. Wolfenstein: The New Order is the first game released legally in Germany in the series, yet remains heavily censored with any mentions of Nazis removed from the game.

Despite the issues the game has when played today, no one can deny the influence of the first person shooter that started the genre. Released and re-released countless times since 1992 it retains the nostalgic itch it scratches, it feels as if one’s playing something historical. One can play it for free in a browser version, as supplied by Bethesda. If you haven’t played it yet, and I highly doubt you haven’t, you owe it to yourself to give the game a playthrough just to know where it all started. If you’ve played it already, then why not play it again just for that goofy early 90s shooter feel it provides? Despite being 22 years old, and like many of id’s other titles I doubt it’s going away anytime soon.