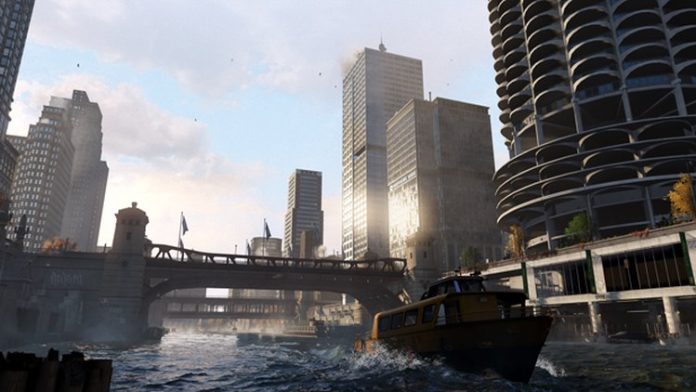 Watch Dogs was never going to be a revolutionary experience that you could only get with next-gen consoles but it did promise an an interesting spin on the open-world formula. Make no mistake, Watch Dogs is a good game but that almost seems like it is not quite enough when it was very clear that it was engineered to be amazing. It might not deliver on the visual fidelity of its E3 2012 reveal but it definitely gives us a fun spin on a genre’s predictable gameplay with new twists on old concepts.

Watch Dogs takes place in a vaguely futuristic Chicago. Virtually everything is controlled by the ctOS (Central Operating System) and data on all citizens is stored within. Eleven months after a botched hacking operation led to the death of his niece, protagonist Aiden Pearce decides to take justice into his own hands. A larger noir-like narrative swallows up his quest for revenge but it never really strays too far from cliché and foreseeable territory.

You might have heard that Ubisoft described Aiden as “iconic” which is questionable at best and hilarious at worst. Watch Dogs does not have a strong cast of compelling characters although it really wants you to believe that it does. Each short-lived moment of sympathy I felt for Aiden was lost amidst the generic dialogue, the monotonic and stereotypical “gruff” voiceover or the tonal inconsistency. Aiden commits some pretty morally questionable acts in his quest for vengeance but it is hand waved away because his enemies, without exception, are corrupt in some way.

Where Watch Dogs shines and delivers, however, is its gameplay. Let’s be honest, the premise of an entire city relying on a single operating system for nearly everything is ridiculous. Watch Dogs revels in this absurdity and it is all the better for it. Aiden’s smartphone is an enormously powerful tool that allows you manipulate the world around you, environment and citizens alike. Want to cause an enormous blackout and sneak around? You can do that. How about causing an 8-car pile up by changing the light at the intersection to green? Go hog-wild!

Compared to Infamous: Second Son’s beautiful but otherwise lifeless imagining of Seattle, Watch Dog’s Chicago is essentially the opposite. Personally, I enjoyed the fun-sized bits of detail the smartphone’s Profiler app gave me. Just the name, occupation, salary, and an occasionally goofy little tidbit of information was already pretty substantial work towards making the city feel lived in but the interactions you can have with anyone’s phone sealed the deal for me. You can download their music, steal their money right from their bank account and even intercept their text messages or phone calls. Aiden is more or less always going to be a criminal of sorts though the people’s perception of him influences how willing they are to call the cops, but the game itself never explicitly condemns or rewards you for these decisions so feel free to peek away. 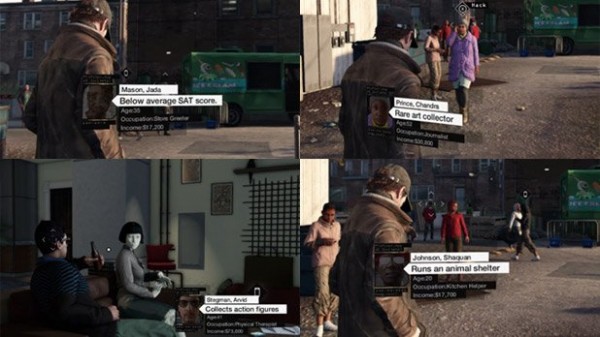 While the one-button hacking seems superfluous, there is really no other way it could have worked. It either would have been a very tedious minigame that was not worth the hassle or endless QTEs that would kill the flow of gameplay. The result is a very easy way of accessing a varied toolset and the game would have suffered if it were any other implementation. This is particularly true of combat scenarios where the hacking mechanics really get their turn in the spotlight.

Hacking security cameras gives you a way to check out all of your options while you are planning your moves from behind cover. Leaping between lenses is a very interesting experience, but Aiden’s skills are not limited to this alone. You can overload transformers, set off explosives, simply distract guards with a message, and more. Aiden is also capable of crafting lures on the fly, which he can then hack and lead guards away from their position. While these encounters can be cleared with a clever combination of hacking and stealth, there is a satisfying arsenal to fall back on and the cover system is perfectly functional. This is good because Aiden is on the frailer side of action heroes—which is appropriate, considering that he really is just a hacker. Unfortunately, this is at odds with the immensely boring tailing and autofail stealth missions that are a little too reminiscent of Assassin’s Creed and just a slog that destroys the game’s pacing. Driving, as well, can be a bit of a bother with some finicky handling and fishtailing but it is never unplayably bad. 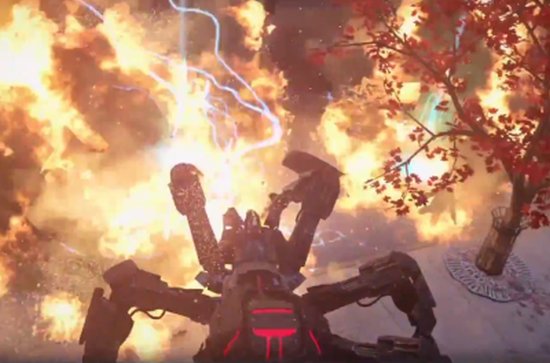 There is an enormous breadth of content within the game outside of these hacking shenanigans but some of them seem more like bloat than actual content. This happens to be the case because the minigames that Aiden can play have skill tress all their own that have nothing to do with his progression or new abilities. These minigames are certainly substantial though and in some cases have very clearly borrowed inspiration from Saint’s Row IV in their augmented reality silliness. Spider Tank, which I found to be completely insane, is basically what it sounds like. You get control over a walking tank and your goal is to cause as much destruction as possible with the occasional mission. Beyond these, there is a very respectable amount of side missions to tackle, unlocking different vehicles and skills as you accomplish them. 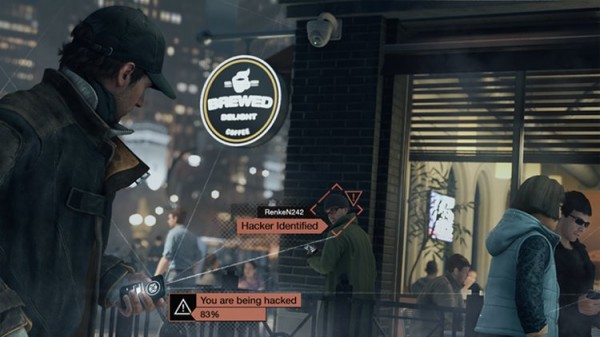 Beyond its entertaining single player options, Watch Dogs brilliantly takes a page out of Dark Souls’ book and seamlessly integrates online multiplayer into its single player experience. Similarly to the Souls series’ invasions, you may find your ‘data’ being stolen from afar while you play. These thieves appear in your game disguised as ordinary civilians and it is up to you stop them. When the warning pops up on your screen, it is sure to throw you into a brief anxiety. It beautifully captures everything Watch Dogs represents: the dangers of the violation of privacy and principles of security. It is an interesting blend of impromptu Assassin’s Creed multiplayer with the spontaneity of the Souls series that works out very well and will most likely have a longer lifespan than the online racing or standard objective-based multiplayer modes.

It has a bit of a struggle figuring out exactly what it wants to be, but Watch Dogs is at its best when you take a step back and revel in its absurdity and enjoy it for its existence as a game first and a narrative attempt second. If you are really on the fence about Watch Dogs, ask yourself whether or not you liked the first Assassin’s Creed, flaws and all, because Watch Dogs is similar in many respects. Their protagonists are uninteresting and their narratives are sort of meandering. They both lack a certain sense of polish that, in Assassin’s Creed’s case, Ubisoft explored and refined as the series went on. As games, though, they are great for just running around and goofing off. Should Ubisoft choose to expand on Watch Dogs as a franchise it will undoubtedly improve.

Where Assassin’s Creed lacked polish, Watch Dogs lacks conviction in what it is trying to do so it ends up trying its hand at everything, occasionally directly pulling concepts from other games. As a result, the final product is absolutely enjoyable if a little unfocused. It delivers on its promise of a unique experience in an open world and can be hysterical in its arcade-like experience, and sometimes that is more than enough. The sheer variety of options that you have, be it on foot, in a vehicle, combat, you name it, will make sure your approach never gets too stale. The hackneyed story will not be winning any awards and it might not be game changer Ubisoft had hoped for, but you will not regret the time you spend with Aiden and his magical hacking smartphone.