A plethora of .io games boast a slogan of “Eat or be eaten” or “Kill or be killed.” These multiplayer bouts come in many forms, from snake battles to tank wars. Agar.io was first, followed by countless copycats. Slither.io is one of the most successful spinoffs, showcasing slick graphical improvements and gameplay variations. .io games have dominated the online gaming marketplace for nearly two years, and they’re not going anywhere. The latest is Paper.io, and it’s a goodie.

Paper.io plays like Snake for the 21st century. It’s a smooth and fast-paced multiplayer game. There are no apples of food. In Paper.io, players compete to overtake the entire landscape. When one player stretches out and encapsulates a piece of land, it becomes theirs. The objective is to gain more territory than everyone else. This results in a ruthless competition for total power.

There are no winners in Paper.io; there are only leaders and losers. The former are rewarded with a spot in the Top 5. But, nothing lasts forever. As soon as a top player’s base shrinks, they will disappear from the leaderboard. Losers are, well, everyone else. Success in Paper.io requires persistence. If you play aggressively and capture enough territory, you will be rewarded.

Personal stats appear at the end of each round. These include final and best scores, which are shown in percentages. Each percent value represents how much of the arena you owned. For instance, a personal best of 30% means that you possessed nearly a third of the grid at some point. Other stats include time played (shown in minutes and seconds) and players killed. The number of players defeated doesn’t really matter, but it’s worth its weight in bragging-rights gold—before starting another game, you have the option to share those stats on Facebook.

Paper.io looks and feels quite polished. The animations are pretty, and bright colors blend nicely. The controls are responsive, and it’s easy to execute quick maneuvers. With a four-button control scheme (you move via WASD or the arrow keys), there are no tricky button combos to learn or memorize. Paper.io offers a welcome mix of retro charm with modern technology. It’s almost as if the game is old and new at the same time, which works in its favor. 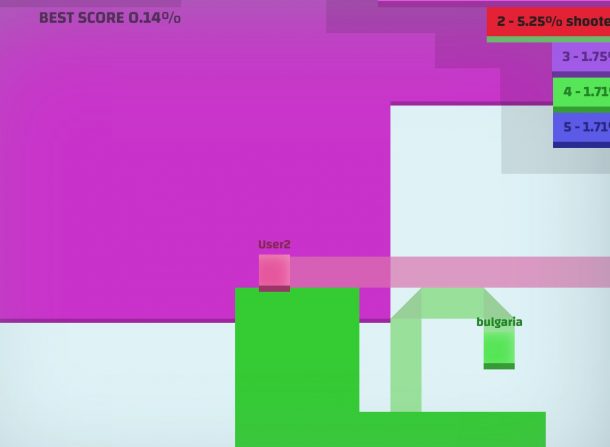 Paper.io might not be the most inventive game, but it’s one of the most addictive. Many previous .io titles feature similar action, which has proved extremely successful. Players fight over limited territory within a confined space. This forces direct competition, as gamers constantly wage war over the same parts of the grid. Paper.io keeps the action perfectly fair, because there are no bonuses or power-ups. Each player moves at the same speed, regardless of their rank. If anything, the advantage is skewed towards newer competitors, because they have hardly anything to lose.

Overall, Paper.io is another successful entry in the .io genre. Gamers with much experience will feel comfortable competing right away. But really, newbies have an equal shot at success.