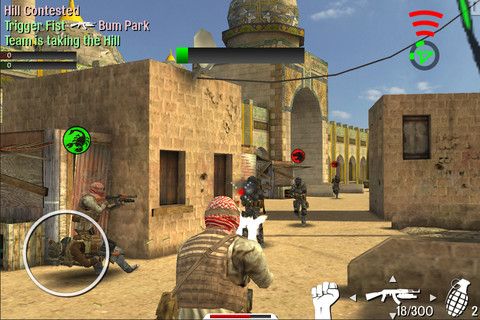 Trigger Fist was just released by Lake Effect Applications and it already proves to be one of the best if not the best multiplayer shooters available on iPhone or iPad. You get true console quality with this shooter which says a lot: great gameplay, intense battles and overall an amazing experience that you will never forget.

However, there are some things to know and take into account when playing Trigger Fist because it’s not all about how good your aim is in the game. That’s why I have decided to create this short strategy guide with some tips and tricks for Trigger Fist – probably common sense stuff that will make you a lot better at this game. And you’ll keep saving the goat. Oh, the goat!

1. Play it on an iPad.
This is not really a tip and you can’t do much about it if you don’t have one, but this particular shooter plays a lot better on the big screen of the iPad rather than on an iPhone where things might get a bit crowded and controls are a bit slower. So if you have a choice, play the game on the iPad!

2. Best Trigger Fist Perks
You can equip 2 different perks when you start the game and there are many possible combinations (it also depends on what class you play). But I would definitely recommend the following perks because of their amazing bonuses: Deep pockets since extra ammo is always nice, Awareness when you start to get a hang of the radar, as well as Double Stuffed and Heavy Barrel. Personally, I consider Adrenaline quite useless because when you get in a fight, it rarely make a difference.

3. Keep moving!
It’s common sense for any shooter right now: if you keep moving, your enemies will have a harder time hitting you. So learn to move and shoot at the same time and you’ll increase your life span out there!

4. Duck and cover!
If you really want or have to hold position, then try to duck (slide down on the screen) and hide behind crates or other stuff that can’t be shot through. You can waste anybody coming from the front, but you’re exposed at the back. And nobody likes campers!

5. Learn to use the radar
The radar (thing in the upper right corner that shows you where the shots come from) is extremely useful and can help you catch your opponents unprepared. Learn to always keep an eye on the radar and you will never have the unpleasant surprise of running into open fire.

6. Use the grenades to create diversions
If you come down a corridor and you hear shooting in an area, throw a grenade in front and enter the area from a side – your enemies will most likely face the spot from where the grenade came, waiting to shoot. They will have a surprise!

8. If you have the money, unlock the new weapons
There is a cost of $0.99 to unlock the next weapon and therefore get yourself a better gun. If you’re willing to play the game with better weapons and you want to pay for it, do it. Some extra power never hurts!