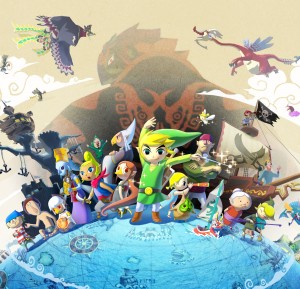 The recently released Wii U version of The Legend of Zelda: The Wind Waker took Nintendo only 6 months to develop, series producer Eiji Aonuma revealed in an interview with 4Gamer (translated by Siliconera).

Even though it only took 6 months, Aonuma explained that it was still challenging to update the 2003 Gamecube original.

“Development was still difficult,” he said. “You had to consider the difference in hardware at the time.” Additionally there is a technique known as toon shading, which gives the game a very animated look. At that time, the technique was established, but had not be used before by our staff, everyone had to do everything by hand,” he added.

The update to a 16:9 video format forced Nintendo to completely rework certain scenes in the game. They had to be changed manually in order to accommodate the video format and to look right in the final release. “For dramatic purposes, we would have characters we didn’t want in the frame, out of sight, but on the 16:9 ratio, you could still see those characters,” Aonuma said.

Despite the short development time and the challenge Nintendo had to face in that time period, the game was still met with exceptional critical praise. The game currently sits at a 90 Metacritic score. A Wii U Wind Waker bundle is also available for $299.99. It includes a 32gb Wii U console and special edition Gamepad alongside the digital version of The Wind Waker and a digital Hryulia book.

The Legend of Zelda: The Wind Waker is out now both digitally and at retail.