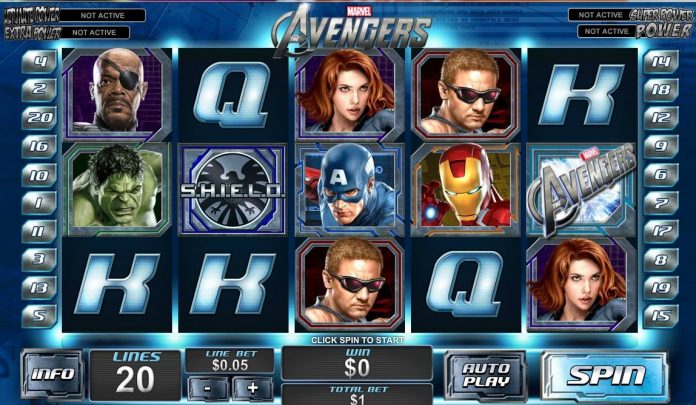 Are you looking for an online video slot to play—either for fun or money? If so, you have no shortage of options. There are countless slot games available online, ranging from slots based on licensed movie and TV properties to slots with completely original concepts. You can hardly go wrong by picking an online casino and just exploring the slots they have. However, if you are looking for proven slot games that are already massively popular among players, here are five slots that should be on your “to try” list:

Desert Treasure
Desert Treasure will make an appearance on virtually any list of the best or most popular slot games, and it’s not difficult to see why. The game is older, which means that it doesn’t have some of the sleeker visuals or animations of newer slots. However, Desert Treasure is still hugely popular for its exotic Arabian Nights theme, its generous free spin offerings, and its reputation for higher-than-average returns.

The Avengers
Playtech’s Marvel slots have all been among the internet’s most popular slot games since the company first signed an agreement with Marvel in 2010. The Avengers slot is arguably the ultimate Marvel slot game because it puts several of Marvel’s most iconic heroes together in one game. There are even four different bonus games, one for each of the main heroes (Iron Man, Captain America, Thor, and the Hulk) from the Avengers films. Unfortunately, according to TheCasinoDB, Marvel has decided to end the agreement with Playtech, which means that the Marvel slots from Playtech won’t be playable any longer.

Thunderstruck II
If you want to play a Thor-themed slot but can’t find a playable Marvel game thanks to the termination of Marvel’s Playtech deal, Thunderstruck II is the next best thing. Based on the theme of Norse mythology, Thunderstruck II gives players 243 pay lines, four distinct bonus games, and plenty of opportunities to win. The original Thunderstruck debuted in 2004 and has been a favorite online slot game for more than a decade. The sequel updates the graphics and sound while keeping much of the original gameplay intact.

Castle Builder
A medieval-themed slot game, Castle Builder, is as innovative as online video slots get. The first thing you will notice about this game is that the reels themselves are small, pushed to the right-hand half of the screen. The other half of the screen is devoted to your castle, which you build throughout the game as you hit certain symbols. Once you’ve built a castle, you enter a “royal wedding” bonus game where it’s possible to win a lot of extra money. The castle building formula is unique and fun and adds additional momentum to the game.

A Night Out
The A Night Out slot is as fun as a youthful spring break vacation. This bar-themed slot allows players to hop from bar to bar, spinning the fast-moving reels, matching cocktail symbols, and gunning for free spins (up to 20) and large multipliers (up to 10x). The bar-hopping theme of the game is fun, but the promise of free spins and high multipliers are what make A Night Out addictive.