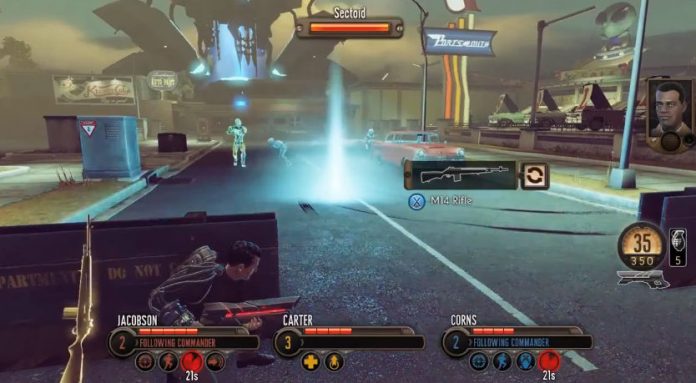 In an interview with VG24/7 2K Games today debuted the first gameplay from the upcoming Bureau, a third person take on the XCOM series.

Graphically, the game features stylised graphics, particularly in terms of the face. However the art style still looks more realistic than that used in XCOM Enemy Unknown.

The gameplay immediately dispels at least some of the fears that The Bureau would be a dumbed down version of the XCOM games, featuring a Battle Focus ability that allows players to control the movement and ability usage of their allies in slow mo. However the real time aspects also show through, with the player character able to take pot shots at enemies and dashing through live fire with the support of their allies.

These allies are split up into four different classes: a Tanky commando, a Support class, a Recon class that does high damage with weapons and an Engineer, whose primary source of damage is equipment like turrets and mines. Apparently the exact makeup of a team will be down to player choice, with players able to bring in the squad mates they feel will most complement their playstyle, much like XCOM Enemy Unknown.

Also like last year’s XCOM, perma death will be a major feature, potentially leading to the loss of high ranked squad mates during difficult missions.

The Bereau is slated for an August 20 release date.