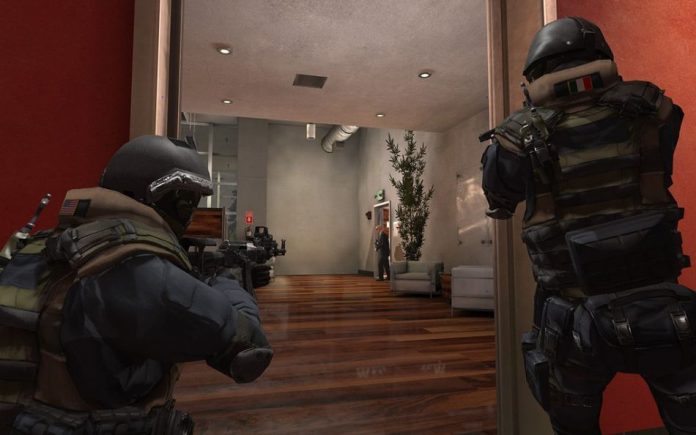 Takedown: Red Sabre has had a rough journey so far. It started as a Kickstarter, but initially the game had a rather dead reception. The Kickstarter proposed $200,000 dollars needed to be raised in order for the game to be put into an alpha phase. However, 1 week before the end of the Kickstarter program it only had one third of it’s goal. The Kickstarter campaign gained momentum quickly on the final days following a revamping of the campaign and a cinematic video, and finally crossed the mark in the very last hours, ending at $221,833 in total pledges from 5,423 backers on April 1, 2012.

Besides actually getting the game into an alpha stage, the Kickstarter was also used as a tool to show publishers that the tactical shooter genre was still viable. Recently, the rise of the Call Of Duty series has taken the focus of the FPS genre away from tactical shooters toward a more run and gun mentality. The Director of the game, Christian Allen, who worked on the Tom Clancy’s series, is well known for his knowledge and proficiency within the tactical shooter genre. I have no doubt that he will C2 it(sorry), that a good game emerges from the Kickstarter money.

With regards to the actual trailer, it doesn’t show much, apart from bad weapon fidelity and lacking animations. For a game released in 2013, the animations make it look as if we are still in 2004. I know that aesthetics are just a superficial aspect, but at first glance I couldn’t tell if the soldier at 1:06 was throwing a lemon or a grenade(CITRUS BURST!). Not to mention that the explosion following the lemon throw looked like something Lichtenstein would paint.

So, things that aren’t very clear from the trailer: players will be able to select their equipment with everything unlocked from the start(Hooray!). It’s up to them to select the correct bits for the situation at hand. You’ll even have to consider your ammunition’s penetration value, and how noisy it is. That sort of detail is applied to the whole game. It’s a shame that’s not in the trailer, if you’re looking to make your unknown game stand out, the worst way to go about it is to try and show off men shooting each other. Battlefield will always beat you at that. They are the masters of the aesthetic. The trailer should be addressing the intricacies of the game, show us some suppression, show us some discombobulating grenades, and show a variety of content. Men shooting at each other is far too generic, and considering the fact that the game looks as if it was created with Gary’s Mod, it’s hardly a strength. Show your games strengths and appeals, don’t copy everyone else.

The trailer isn’t just the team being generous. It has a nefarious plan to lead you to buy the game, which is out this month on September 20th, 2013.