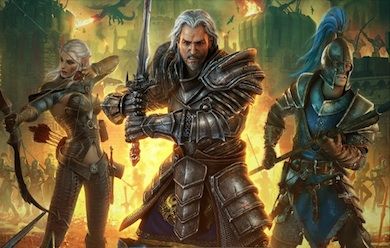 OK, so now that we’ve learned how to play Stormfall: Age of War, we are ready to cause some real trouble in the game with our armies and turn our kingdom into one of the better kingdoms out there. I am here to share with you some Stormfall strategy tips that will hopefully help you achieve this goal faster.

I did try to group these Stormfall Age of War tips into categories, but since the game is so complex, they still ended up a bit random, but they’re all equally valuable, so read on the entire list – you will surely find something you’ll consider extremely useful!

1. Focus on completing quests
Don’t try to get ahead of yourself and follow the story of the quests – I didn’t and ended up having a hard time at a specific point, after I had lost all my army and I was starting to get farmed on by other players. So follow the quests, complete them, and you’ll learn a lot more about the game’s mechanics!

2. Don’t pile up too many resources
I know that this is pretty difficult to do, but try to keep your resources as low as possible especially when you log out of the game – this way, if an attack comes, you will lose minimum resources. So try to keep an expensive upgrade or troop order for right before you log out!

3. Multitask
It’s better to learn to get the most of your playing time by multitasking. This means that you can build or upgrade a building and at the same time research a lost art, use your scrolls in the Obelisk of Power and attack at the same time. This way you’ll get the most out of the game in as little time as possible!

4. Get extra resources from around the castle
Make sure that you check out the surroundings of your castle for boars, skeletons or trolls – each gives you 20 resources which are extremely useful, especially early on!

5. Visit friends for resources & hope for a visit back
Try to visit your most active friends and click on their Crypt to fill it with Wraiths (and hope that they will do the same for you). Also, you can find the boars and skeletons for free resources and click them near every castle of your friends, so if you have 10 friends to start with you can easily get at least 200 of each resource for free!

6. Hold onto your Sapphire
The Sapphire is the premium currency and you have a lot of it at the beginning of the game and you will keep earning for free by completing missions. Therefore, you might be tempted to spend them on better units, which you shouldn’t until you have a decent size army. Sapphire units can be lost in combat (if you attack or get attacked) and your armies early on will be pretty low, so it would not be wise to spend Sapphires on troops early on.

7. Spend Sapphire on Fortifications
These offer you Defensive bonuses (and even Intelligence bonuses) and they are here to stay. So a better way to spend your Sapphires early on is to purchase these Fortifications that will help you a lot throughout the game!

8. Keep Upgrading the Lost Arts
Don’t stretch too much with the Lost Arts – it’s not really a bonus to have all the arts researched, even though some do unlock new buildings and troops in the game. However, upgrading the already researched Lost Arts is a great idea to improve the stats of your existing troops!

10. Scour the market for bargains
The market is a great place for finding bargains. Every now and then, there will be a player in a huge need of something (usually metal) offering a lot of a different resource to get what he or she wants. So keep an eye on the market for bargains and you can end up scoring good resources for cheap. A strategy here is to improve your metal production and keep offering it on the market while asking for double the amount of food or gold. And it works!

11. Keep offensive troops out!
Try to keep your offensive troops as little as possible in your castle to avoid losing them in an attack. A good strategy here is to attack other players or battlegrounds and keep doing it to get extra resources. But there is another strategy we’re going to talk about below to protect your troops.

12. How to protect all your troops
It is extremely easy to send a reinforcement to a castle nearby that is below level 9 (best is to find an inactive player). Castles under level 9 can’t be attacked, which means that your troops are safe and sound there and you can keep them as long as you want (and recall them whenever you want to). It’s a good strategy to use this to build up your army, then hit the player that’s farming on you hard and get your sweet revenge!

13. Attack when you are about to be attacked
Many players use to send their defensive troops in an attack just to make sure that they win the battle. But this means that their own defenses remain weak, so an counter-attack might be what you need to do here. Even if they keep all the defensive troops at home, at least you know that they don’t get bonus from extra troops (the offensive ones) and they are easier to conquer. And hopefully this way they will learn to leave you alone.

14. How to minimize loses in an attack
If you are sure that an incoming attack is going to crush your defense, it’s better to minimize your casualties. Therefore, if you have troops in your castle and you want to keep them, it might be best to send them out (attack something or reinforce a nearby low level player), but make sure that they don’t get back before after the attack. Also, try to use your resources to build as much as possible so you lose as little as possible. Losses are a part of the game, but you can minimize them this way!

15. Troop building strategy
The thing is that once you’re out of protection, you will be unable to defend your castle and a “smart” player will always be there to attack you. So it might be best to focus on producing offensive troops only and also attack with the defensive troops you are rewarded. Keep attacking to get resources, keep your troops out and keep fighting until you can assemble a solid defence to protect your castle. After all, a good offense is the best defense!

And these are the Stormfall tips and tricks for a better strategy that I had to share with you. Go more in depth in the comment section below and share your strategies for a better game!