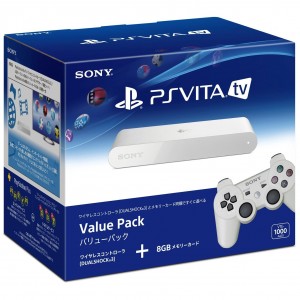 Sony Japan’s Masayasu Ito, in speaking with Eurogamer, revealed Sony’s surprise at the positive reactions the company received from the West and Europe for their new streaming hardware device. Originally announced at Sony’s pre-TGS press conference last week, PS Vita TV will allow consumers to play Vita games and potentially stream PS4 and PS3 titles through Gaikai. The small device, which was claimed as being the smallest piece of hardware Sony ever developed, is only lined up for a Japanese launch. Sony are still considering whether or not to release the device overseas. It seems as though the overwhelming reaction will sway the company to go forth with the launches.

Ito states the response was “strong… more than we expected.” The only thing that is holding back the decision to launch is the other alternatives currently available in the West and Europe. “But when it comes to the timing, we’ll have to watch the environment and identify what other services are available in the US and Europe and whether we’ll have to add other services,” Ito said.

CEO Andrew House further details Sony’s decision concerning PS Vita TV. “The reason we wanted to launch PlayStation Vita TV in Japan first was because we think that there is a significant gap in this market even for a pure streamed TV box,” House said. “There isn’t really a competitor here that’s staked out a claim. And frankly, in my own view, Japan is a little behind the adoption curve in video streaming services.”

PS Vita TV will launch with the cheap price of 9,480 yen, or $95. The hardware will also come bundled in with a 8gb memory card and a DualShock 3 controller for about $60 more. The device is set to make its debut later this year in Japan only.