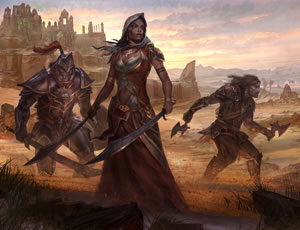 In a video interview with Gameinformer Adam Boyce, VP of publisher and relations at SCEA, it was revealed that the Elder Scrolls Online was never planned to come on consoles. Adam Boyce and his team met with Bethesda on numerous occasions to persuade the publisher to release their upcoming MMO epic on the PS4.

“That game was never planned to come to consoles,” Boyce said. “And we just kind of kept sitting with [Bethesda] and being like, ‘Why not?'”

“Knowing that a game’s coming to console that was never going to come to console, that’s the kind of stuff that is, like, ‘Yes!’ You know, hugely awesome,” Boyce said.

This enthusiasm spread to Microsoft as well, The Elder Scrolls Online is planned to come out for the Xbox One in 2014.

The MMO carries a $15 monthly subscription alongside the yearly subscriptions that Playstation and Xbox users have to pay in order to access online game play. The game also retails at a $60 price tag.

Sony also revealed a Third Party games initiative that is planned to bring in more third-party content to Sony’s platforms. The first game in this initiative is the Vita version of Borderlands 2, something that was never planned to happen but did due to Sony’s efforts to bring the game to their handheld.

It seems as though Sony’s hardcore gaming mentality is on overdrive at this point. The PS4 is set to launch on November 15 in North America and November 29 in Europe.