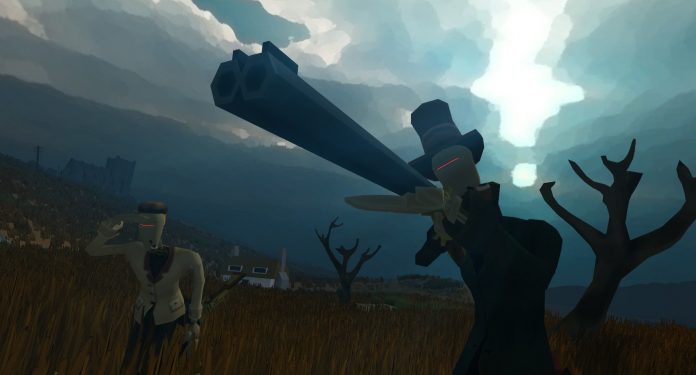 Prepare for stereotypes, the likes of which you have never experienced before. Sir, You Are Being Hunted is a survival game, which shares many similarities with games such as Arma III, Dayz and Warz. After all, they are essentially the same game, right? I digress. The game has taken the popular zombie survival genre, and replaced the zombies with robot gentry. Nothing better than eloquently spoken killer robots and their k9’s chasing you through the English countryside. A truly odd, yet stimulating experience. I regularly felt like a fox being hunted by the English Gentry and their hounds…poor foxes. As mentioned, the game is set in the English Countryside; a rather neglected setting for modern games. It executes the setting perfectly, and everything about the game feels distinctly British. Overcast skies, fog effects, and the colouring used will remind us Brit’s why we don’t go outside; and instead prefer to hide in the dark playing video games. Don’t be disheartened though, being chased by scary beep-booping robots through the English countryside is a truly unique and exhilarating experience.

The game is based around a mad scientist who…you guessed it, failed an experiment. Somewhat cliché, yet perfectly executed. The entire game revolves around cleaning up your mistakes by collecting fragments of some sort of machine, and returning them to a predestined location. Every play-through will differ, however, due to the fact that the world, or biomes as they are known, are randomly generated. At the start of each play-through you can configure what the world will look like, by choosing the terrain that you will encounter on each of the 4 biomes. There are various terrain options, the most interesting of which is definitely the rocky/mountainous terrain. For most of the game you will be sneaking around in the hinterlands surrounding small hamlets, or rummaging through old outhouses and buildings in the hope of finding tea, biscuits and fine British Ale. I warned you that the stereotypes were strong! The only things missing are scones and crumpets, but then again, they would be rather scarce in a post-apocalyptic world.

The atmosphere of the game is outstanding, it feels quintessentially British. Overcast skies, fog effects, and the dull pallet used, all add a very sullen British aesthetic to the game. The leafless copses and fauna are all perfectly fitting, and add a very realistic feel to the game. The setting is a real strength, and whilst escaping from my hunters I repeatedly felt like a prisoner escaping from Dartmoor, not that I’d know what that feels like. The overgrown fields and higgledy piggledy hedgerows provide a perfect environment to hide and misguide your predators. The only issue that I had whilst stalking amidst the overgrown grass and fauna, was the fact that there is no option to crouch, crawl or lay. It seems nonsensical to have a game based around stealth and subtlety, without the ability to properly conceal yourself.

Once the robot gentry or their K9’s spot you, you will either have to run for your life, or engage in a gunfight with guns that literally couldn’t hit the broad side of a barn. Trust me, I actually tried to shoot a barn; and missed. The gun-play may feel slow and inaccurate, but it actually fits the game and the universe it is set in. The guns feel right because of their slowness, with the robots using vintage hunting rifles; and you using the same(as you scavenge it from their…corpses?). You will regularly find yourself face to face with a robot, both of you reloading, throwing crumpets and foul mouthed words at each other in the mean time…this doesn’t actually happen, but I wish it did. A stale crumpet could easily kill man and robot alike. As it currently stands, there are very few guns in-game, and this is a shame. The option between a pistol and a rifle is rather disappointing, and I would love to see some gimmick weapons such as a slingshot, for reasons of distraction. This is probably a result of the game still being in it’s alpha stage, but I really felt as if the guns were a bit bland, and I tended to use them as more of a distraction tool rather than a deadly weapon.

Whilst playing through the game, I also noticed that my actions had very little consequence attached to them. Some form of consequence for collecting fragments should be present, as currently there is no consequence for picking them up; and it would be awesome if the security increased every time a fragment was collected. Another option could be potentially making you easier to spot whilst carrying a fragment; or just simply increasing the amount of robots present on the map once X amounts of fragments have been recovered. The game could even go as far as to release some form of boss once you have nearly collected all of the fragments. Nothing would please me more than seeing the bloodsucker from STALKER rampaging across the idyllic English countryside. Although it would have to be a robotic bloodsucker…unless, of course, it also escaped from your laboratory when the experiment went horribly wrong!

My second gripe with the game is the fact that the sentry balloons are so underwhelming. They don’t seem to be a worry at all, and I eventually stopped looking up to the sky, as they really offer no threat whatsoever. Having to constantly watch both the sky, and ground, would improve the game greatly and vastly increase the amount of stealth required to complete each play-through. The air balloons currently feel like the overweight house-cat of the security world. The term ‘eye in sky’ really doesn’t apply to them. It would be wonderful if the balloons were dangerous, and if players could fully interact with them; and when I say interact, I obviously mean shoot and loot! Nothing would please me more than shooting a balloon down into the hinterlands — and seeing its flaming wreckage plummet to the ground — knowing fully in my mind that it will be full of tasty crumpets and flasks of strong tea. Or in my case, mouldy bread and a few odd mints. Woe is me.

Something else which deeply worried me after my first successful play-through was the games length, and moreover, its variety of enemies and experiences. The game offers very little in the way of monsters skins, in fact, I could count them on one hand. Moreover, the game really seems to lack a variety of experiences. What I mean by this, is the fact that the objectives are very clear cut; and the ways to complete them are very linear. You collect weaponry and food from houses, and use this to survive whilst collecting fragments. That is all there is to it. While you are partaking in these activities, everything begins to feel very repetitive. There are no consequences for your actions, nor does your progress effect the way in which the game reacts to your actions. This could be fixed by added a progressive AI system to the game, which I have no doubt will occur. After all this game is still in its Alpha stage, and bearing that in mind, it is a very polished experience thus far.

The issue of a lack of experiences could also be overcome, in part, by adding access to buildings. Currently you can loot a building by simply pressing E while standing at its doorway. Providing access to buildings would vastly increase the level of enjoyment, due to the fact that it provides various different environments for the player to explore; but it also allows for a safe haven from those blasted robots and their hounds! Nothing would please me more than having a shoot-out with a robot, whilst I was in the security of a small hamlet. Sounds like a film that Nick Frost and Simon Pegg would act in, and therefore I would like it.

For a game that is in its Alpha stage, Sir, You Are Being Hunted is an outstanding game. It will provide you with hours of stimulating game-play, and you will repeatedly get to fire pot-shots at the British gentry, even if they are automated — which they usually are anyway. You will repeatedly find yourself feeling like a fox being chased by the Lords and their bassets hounds, even if the hounds are reminiscent of k9. The setting and atmosphere of the game are its real strength, and the combination of terrain, fauna, weather, and hamlets provides the game with a distinctly British feel. As with all games in their Alpha stage, there are some flaws; and some improvements do need to be made. However, taking all factors into consideration, with a few changes, Sir You Are Being Hunted has the potential to be an outstanding game upon release.