Valve has been around for quite some time by now, and there is no denying that they have shaped modern PC gaming, ever since they created the Steam platform. They did however start of as game developers, making one of the most beloved fps games of all time – Half-Life. These days the company have successfully managed to build the largest PC infrastructure for games in existence. So why are they still creating games? Should they not focus on making their other products, like Steam, better instead?

Valve is good at creating PC games. But are they good enough? Most of their games are well received by many, but in reality those games pale in comparison to what the company have achieved with Steam. Half-Life 2 was not that special of game, and when looking at it today, it was not the game changer that is should have become. Left 4 Dead is still surely one of the better co-op games out there, but I don’t think that a third game in that series would add much to the formula. Dota 2 is pretty nice, but there are so many other great MOBA games out there, that it feels kind of dull at times.

My point is, that Valve is far better at making gaming platforms such as Steam than they are at making games. Right now they are working at SteamOS, the Steam Controller, as well as the Steam machines. They all look like great inventions for gaming, and it is my belief that those innovations could become even better if Valve put all their resources on them instead. Maybe that would make them able to innovate at a faster pace, and move the industry forward even more.

Now, Valve is a big company, so I have no doubt in my mind that it is possible for them to do both at the same time and prosper. But why should they, when Steam is a far better product then any of their games? One answer to that could of course be that they love making games, and that is why they still do it. If so I commend them. And if that is their reason, they should of course keep it up. If all they want is to earn more money however, there is a big chance that they would earn more by focusing on their other projects instead. 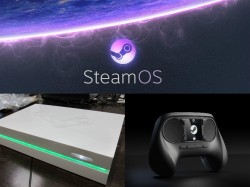 This is innovation at it’s finest. Valve wants to take gaming to Linux PC’s. The result will be a more stable gaming platform, that do not crash as often, and uses more of your components power to speed up gaming. Will they succeed? It is hard to say, but judging from their earlier experiences with Steam – I personally have more belief in this, than any other project that they might be cooking up. Also if that Steam controller works as good as they promise, console gamers will finally have something to replace that mouse and keyboard with.

Sure I like Half-Life – I just don’t think that it is as important to the gaming world as some might think. It gets more difficult each day to get excited for a third game in the series. Especially since we do not know if it is in development – even though some “sources” might point at the possibility. Now maybe Valve surprises us by giving us the greatest fps experience of all time with Half-Life 3, but I personally doubt it. Maybe it would just be better if they made a new fps IP instead. Instead of being disappointed when we notice that Half-Life 3 is just like Half-Life 2 with better graphics – maybe it would be better to put that funding where it might do more good. I might be wrong, maybe Half-Life 3 will reshape fps gaming as we know it. If it is released – I surely hope so.

Whatever Valve decides to do they will surely be around as long as PC gaming keeps evolving. Let’s just hope that their possible future games hold better innovation than their current lineup, and do not hog to much resources that could have been put on other innovations.

What do you think? Should Valve keep making games? Or should they focus on the hardware side of things and their gaming platforms instead?