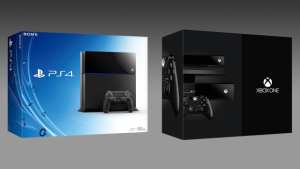 Resident Evil creator Shinji Mikami has expressed his opinion towards the two competing next-gen consoles that are set to arrive this fall. The legendary developer believes both systems are practically identical, containing roughly the same specs.

In speaking with Edge (The Sixth Axis), Mikami believes “there’s no real difference between them,” even going as far as calling the task of developing for two separate consoles a nuisance.

“We only need one console. Why do I have to make two versions of a game? And when Xbox One was first announced it had lower specs than PS4, but now they’re almost identical. So either will do.”

Only a couple of months back, a group of developers were quoted saying that the PS4 was slightly more powerful than the Xbox One. But it seems as though Microsoft implemented some last minute changes to increase their console’s clock speed and graphical power.

Mikami and games studio Tango Gameworks are currently developing The Evil Within, a 3rd-person survival horror game promised to return the declining genre back to it’s roots. The game, published by Bethesda Softworks, will mark the last videogame Mikami will ever develop. The game is set to make it’s debut sometime in 2014 for both next-gen and last-gen platforms; more specifically on PS3, PS4, Xbox 360, and Xbox One.