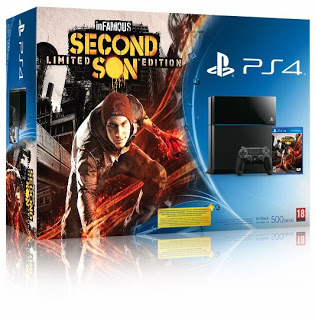 Sucker Punch co-founder Brian Fleming has confirmed that there will be a Infamous: Second Son bundle available in stores by the time the game launches sometime in February 2014.

The box art for the bundle was leaked earlier online through what looks to be a European gaming site, Multiplayer.com. The site also listed a February 7 release date for the bundle, indicating that the game might release on the 7th. But Fleming confirmed that this isn’t the real date on twitter, “No, that’s not the correct date. We will announce the date this week officially.”

The existence of this bundle will no doubt excite some consumers, as the ongoing trend of a lack of compelling first-party titles for the PS4 on day one is ever more apparent as we get closer to launch. Both first-party launch titles, Killzone: Shadow Fall and especially Knack, have reviewed poorly. Shadow Fall is currently sitting on a 74 Metacritic score with Knack sporting a disappointing 59 score.

When Infamous: Second Son was first revealed back at the PS4 reveal event, the game quickly became the most exciting prospect for the PS4 for the short run.