Another problem that really bugs me but other gamers will probably get over it with ease is the fact that you can’t skip just one line during the dialogue, but the entire discussion. This is a bad thing for those who, just like myself, use the subtitles and read them faster than the character tells them. So you have to wait for everybody to finish what it has to say or risk losing an important clue. A tough choice!

The overall puzzles are not at all difficult – except for the “finding the right recording” quest – you will only care at most 4-5 items at once, you will have to interact with very few people and travel to few locations during each sequence, so you will be cruising through this game with ease. Which is not necessary a bad thing, since it gets pretty relaxing.

The graphic aspect in Overclocked is divided into two pieces: the cutscenes which are wonderfully crafted and the general gameplay where the visuals do not rise to today’s standards. The character design is pretty bad and most of the stars are pretty… uhm… ugly, you know? The only thing I liked regarding the gameplay was the split-screen action, which adds to the overall quality, even though it’s not at all a original feature (we’ve seen it greatly done in Indigo Prophecy aka Fahrenheit).

The voice acting in Overclocked is decent, not too great but not a turn off either. However, the recording of the dialogues must have been done in a strange manner, since there are long, frustrating breaks between the lines (which, combined with the fact that you can’t skip single lines turns into a big time-waster). On the other hand, the soundtrack of Overclocked is a true masterpiece, fitting the atmosphere and the overall experience greatly.

Conclusion: Overall, Overclocked: A History of Violence, kind of fails to achieve anything notable in the gaming world. It has a really good story and it starts incredibly awesome, but it fails with simple quests, linearity and the few mechanics problems mentioned above. 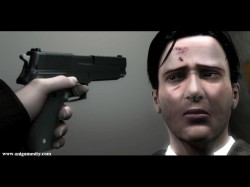 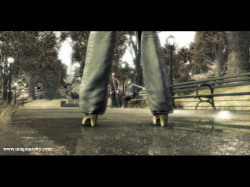