I must admit that sometimes I am simply charmed by the power some people prove to have: power to overcome all problems, never give up fighting and eventually get everything they wanted in the first place. That’s the situation with KitsuneNoYume, a PlayStation 3 fan that will not let his medical problems stop him from doing what he likes most: playing games on his console.

He posted on the official PlayStation forums images with his custom made controller: 16 switches that correspond to buttons, the right/left analog stick to be controlled with the tongue and more triggers controlled with the feet. In order to get things done, KitsuneNoYume worked for two months but now he is happy to be able to play games: he beat the Mirrors Edge demo and loves Metal Gear Solid 4 and Wipeout HD. “It’s more like a coming home party after many years of denial,” he says.

And he also wrote on the forums: “The main reason I put this on the PlayStation website was to show people that even the most limited person can still enjoy console gaming just as much… anyone else. […] I really want the Sony people to see this as well, because many years ago when I was asking about this they had no idea worked to send me.”

And I must admit that this is simply amazing. It proves that, no matter what obstacles we have ahead, we should never stop. Congratulations KitsuneNoYume for proving that once again!

Now here are a couple more images of the controller in action: 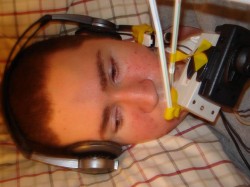 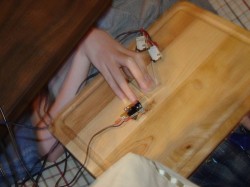