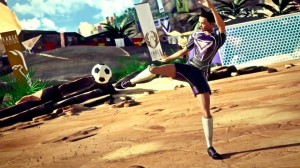 Veteran games studio Rare is well known for creating beloved and classic franchises such as Perfect Dark Zero and Banjo-Kazooie, but recently the developer has been solely focusing on providing software for Microsoft’s Kinect. The multiple iterations of the Kinect Sports series has been the only major output from the studio for quite some time. The studio will continue it’s trend of churning out Kinect sport titles with it’s upcoming Xbox One game Kinect Sports Rivals.

Most of the blame has been ignorantly put on Microsoft, with the company facing acquisitions that they’ve been forcing such a talented and respected developer to only make casual games. Microsoft Game Studios boss Phil Spencer however claims otherwise. In a Podcast Unlocked interview with IGN, Spencer answered a question regarding the aforementioned topic, in which he replied that he has never forced Rare to do anything.

“In terms of force, I know people probably don’t believe it when I say this: I don’t force Rare to do anything, Spencer said, Like, forcing a studio to do something is a very short-term ambition as the head of studios because, in the end, people will vote with their feet, and they’ll just go work somewhere else. And Rare has enjoyed the creative, and, frankly, the hit success of [the] Kinect Sports series; it’s been an incredibly successful series for them, and it’s been great for the studio.”

Spencer went on stating, “I haven’t said they have to continue to work on Kinect Sports Rivals or Kinect Sports is the only thing that they do.”

Spencer also added that he has spoken with Craig Duncan, who is head of the studio, regarding on what the they have planned beyond their Kinect projects. “Last time I talked to Craig, they had some ideas about things they might do that were not in the Kinect Sports series, and I’d be completely supportive of that, absolutely,” he said.

Hopefully this means we might finally get to see Rare return to it’s creative roots during this console generation. Kinect Sports Rivals will release sometime next year, while the Xbox One will make it’s debut on November 22.