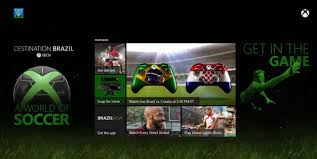 Microsoft has unveiled the ‘Brazil Now’ app, which is designed to allow people to get the most out of this year’s World Cup.

Launching on the 12th June, the app will allow Xbox One users to not only watch the games themselves but will include in-game stats available to view for both teams and players.

As with other apps, Brazil Now can be ‘snapped’ so that you can have it at the side of the screen or playing in the background. It will also give you notifications that tell you important pieces of information about the competition, such as when a match is about to kick off or when a goal has been scored whilst you are playing other games.

You can personalise the app to follow your favourite team, which provides information about their next match, information on their squad and group as well as relevant tweets.

Gold subscription to Xbox Live is not required for the app, but Microsoft say “advanced TV hardware”, broadband and a subscription from an affiliated service provider will be needed.

The app will be a part of the ‘Destination Brazil’ section on Xbox One. The section also includes FIFA 14 Ultimate Team: FIFA World Cup, the Copa90 video channel and interactive reality show ‘Every Street United’.

Every Street United, which will debut on the 15th June, sees footballing legends Edgar Davids and Thierry Henry “scout football’s most gifted, undiscovered street stars across eight countries.” Those chosen will then vie for a place in a 4v4 street football match in Rio de Janeiro.

Again, Xbox Live Gold will not be required for Every Street United.

What are your thoughts on this app?