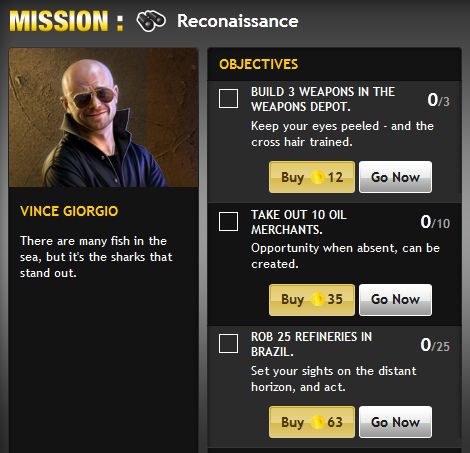 A new set of missions was released by Zynga in Mafia Wars today, the Still Waters missions. We are talking about 10 new goals that we have to complete within the 16 days time limit in order to get the most out of it and I am here to share with you all the details about them. So read on this guide to the Mafia Wars Still Waters missions, if interested.

International Waters mission
– Build 3 Vehicles in the Chop Shop
– Get 16 Crew Members in London
– Job “Meet the Land Mafia to Collect Your Take” in London 40 times
Rewards: 1 Nozzle, 1 Seapig, XP based on level

So as you can see, the Still Waters mission series is not the easiest to complete in Mafia Wars, but the grand reward is something to fight for. So good luck completing these missions in due time!