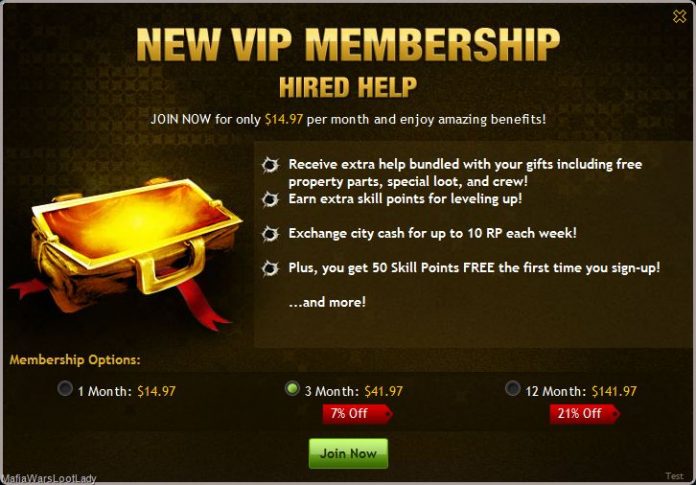 Mafia Wars might become the first ever Facebook game to give it a try to paid membership (even though optional) with the VIP program that they’re working on rolling into the game in the next few months. Mafia Wars players were already reporting pop-ups inviting them to join the VIP Program in Mafia Wars, but it still is inactive and that invitation is just a kind of an early access option that will become available when the VIP Program itself launches.

Zynga has made it public that they’re planning to deliver the VIP Program to Mafia Wars, and here is how they introduced it: “The Mafia Wars team is constantly working on introducing new features in the game as well fixing existing performance issues that have been reported by the community to enhance the overall game-play experience. The VIP program is one such initiative that we are considering over the next few months. Some of you may have already seen the pop-up messages with the details about this program. However, at the moment, this program is not available, and you will not be charged for clicking on the confirmation messages. If & when the program is rolled out, you are not obligated to enroll in it, but you will have priority enrollment at that time.”

If you are still wondering what the VIP Program in Mafia Wars really is, MW Loot Lady managed to get some valuable information to share with us. According to the early details, this VIP Membership (this is how it’s called in the screenshots) will give players numerous benefits, like free loot items, free skill points the first time we sign up for the VIP membership, more than 501 members to the mafia and a lot more benefits. The price for the Mafia Wars VIP program is $14.97 for one month, $41.97 for three and $141.97 for an entire year.

So… what do you think about this VIP Program / VIP Membership in Mafia Wars? Is it something you’re considering joining once it goes live in the game?