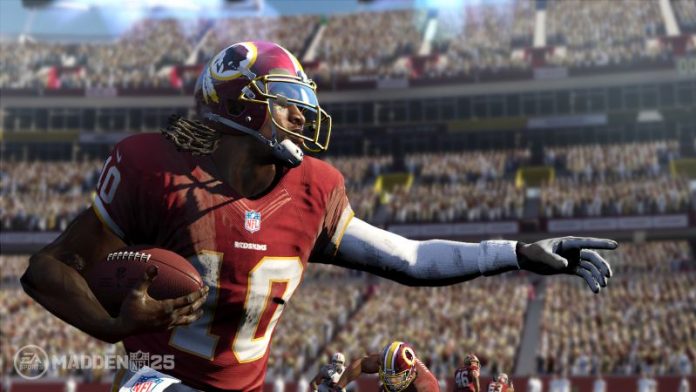 With the release of Madden 25 yesterday, EA also released the mobile version of the game. Made to take the place of the failed Madden Social, Madden 25 for iOS system looked like it had a lot of potential. Sadly, that happened to be the actual case with this game a lot of potential and not enough delivery.

Let’s start out with the positives. The new game play and control system is actually brilliant. Instead of using a virtual joy stick like the last game, players touch the screen in the direction they want the players to go. The game also allows the player to use their finger to drag a path for the player. The game modes themselves are pretty typical for a Madden game. EA went with a “If it ain’t broke, don’t fix it” attitude with the exhibition mode, while they did change up the season mode. Instead a typical season like past games, Madden 25 has the player complete a series of challenges to unlock players for their team. The goal is to build a team of all stars to compete against other people online.

However, that is where the game’s pros end, and it’s cons begin. The menu set up is very confusing. I had to scroll in every direction just to find the exhibition mode.The worst part about this game is it is part social/Facebook game. Madden 25 asks you if you want to log into Facebook when you start it up, and has qualities of a typical social game. You have to use energy to play games and do challenges, it wants you to play with your friends online, and you have to use coins to buy packs of players. I was very disappointed with this aspect of the game. You would think EA learned their lesson with Madden Social, but apparently not.

I’m giving this game 3 stars. If this were just a plain Madden game, I would rate it higher, but the downfalls are too much for me. However, check it out to make your own opinion of the game. Madden 25 is currently free on the App Store with in-app purchases.