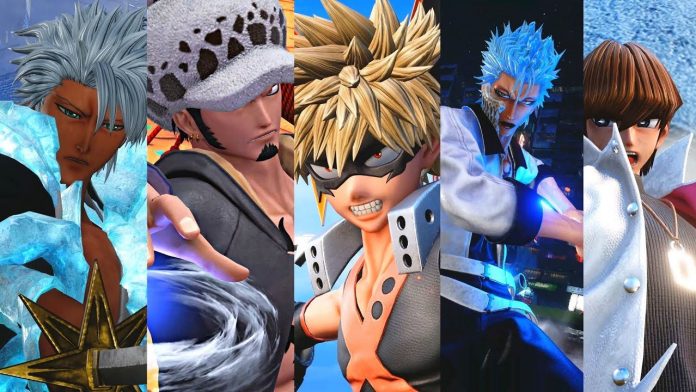 Anime and manga have created a rave on the internet for the right reasons. Besides bringing a coalition of animation and realism, anime characters also pack in an action punch, making it everyone’s favorite.

However, if you are a novice in anime, chances are that Naruto is the only thing you are likely aware of, and that’s fine. But what about video games? Jump Force, one of the top anime integrated games, garnered so much popularity on the internet.

Sadly, Bandai Namco, in February 2022, announced that users wouldn’t be able to buy digital copies of Jump Force or any of the associated DLC characters. They also reported that many of the game’s online services would be discontinued in August 2022.

Although not many players have an idea why Jump Force is getting delisted, the only thing we can do is keep track of all the popular DLC characters for future gameplay. This article explores all of that and more in detail.

The first appearance of Seto Kaiba in Jump Force happens when he encounters Luffy and sabo. This occurs during the venom sightings, which Kaiba collected by himself. During that interaction, Kaiba also tells Luffy and Sabo that the reason he is doing so is to make the world a better place for his little brother, Mokuba. Although Luffy offers Kaiba a choice to join Jump Force, he declines at the moment and says he would ponder the options. He also tells them that he’d work on his strengths to defeat them later when they cross paths.

Although Bakugo’s presence in Jump Force isn’t significant, he predominantly influences Naruto’s journey. Bakugo first appears when Naruto explores the valley in search of more venom but instead crosses paths with Bakugo. Reports suggest that the creators and developers would likely release Toshiro alongside Bakugo, but the idea was benched.

Also known as Good Buu, he is a part of the Dragonball Z series. However, what sets him apart is that he originated as a villain but later transitioned to a good being. He now stays as an ally to Goku and the remaining characters in the game. Buu is also the only character from the Dragonball Z series, which is a DLC. The character came into being at the same time as Bakugo.

Not every day do you come across a dark character with such high skills and status in the game. Madara Uchiha is a part of the 4th Great Ninja War arc and is the only character from the series that is a DLC. Madara came into being alongside Toshiro and is a villain origin character, hence the darkness to it. Madara is a playable character in the game.

All Might is one of the most popular and respected DLC characters in Jump Force. He is the eighth holder of the popular One for All Quirk, acquiring it from Nana Shimura. He later passed the torch to Izuku Midoriya, who is training under him to be his successor. All Might gave it his absolute best and later retired as the world’s greatest hero in the era he worked in.

We have been discussing Toshiro from the beginning of this article, and that’s the degree of importance he holds in the process. He is a character pulled from Thousand Years of Blood Arc. The character of Toshiro and Madara was released at the same time. Besides Grimmjow and Yoruichi, Toshiro is the third character to be DLC in Jump Force. Although Toshiro’s inception was supposed to be alongside Buu and Bakugo, things turned out later.

As confusing as the name of this DLC character is, Grimmjow is hands down one of the most significant ones in the lot. His first appearance is during the encounter with Naruto and Yusuke while looking for venom. Grimmjow belongs to the Thousand Years of Blood Arc, and his character has been pulled from there. Besides Toshiro and Yoruichi, Grimmjow is the third DLC character in the era. Also, he is a villain character, so you need to keep a check on that.

The last and one of the most profound DLC characters from Season 1 of Jump Force is Trafalgar Law. Law’s first appearance comes in the Hidden Leaf Village, where Kenshin and Deku visit to save the lives of a few villagers trapped there. Law is the only piece character from his era to be a DLC character, and his inception came at the same time as Grimmjow.

With the characters from the first season out of the way, let us shift our focus to Season 2. This one brought along a series of allies and villains worth looking into.

The first appearance of Todoroki happens in the Story Mode of Jump Force, and he appears in Tokyo. Also, surprisingly enough, Shoto Todoroki is the first DLC character in Season 2. Also, in the My Hero saga, Todoroki is the third to be a DLC character. Also, Todoroki is one of the few ice users in the game, so his skills are heavily influenced by the same.

Another popular DLC character in Jump Force Season 2 is Meruem. It is a villain character from Hunter x Hunter and first pops up in Paris in Jump Force. During the game, Meruem collaborates with Asta to help them fight to help them break out of the cell. However, Meruem is fast on his feet and leaves before Asta can come around and thank him for the support. Meruem’s character came around the same time as Hiei. Also, besides Biscuit, Meruem is the only DLC character in the game.

Hiei is a very popular character from the Yu Yu Hakusho series. Although his journey starts as a villain, he later transforms into an anti-hero. He is also the only character from the series to be a DLC. Also, Hiei is one of the two playable characters in the game. He is also a dragon user, like a few other DLC characters, including Shiryu, Yugi, Kaiba, and Dai.

Yoruichi is a popular character that originated in the Bleach series based on the Thousand Years Blood arc. Besides Rukia, Yoruichi is the only character from Bleach to be DLC. Also, she steps into the game in her attire before she becomes a DLC character. Alongside Giorno, Yoruichi was also datamined and leaked beforehand.

Last on the list that joins Jump Force Season 2 is Giorno Giovanna from Jojo’s Bizzare Adventures. He is a playable character and one of the only few DLC from the series. With a stunning appearance and attire, he sure manages to catch the players’ attention in the game.

How many DLC characters does Jump Force have?

If this is your first time playing Jump Force, we hope this article gives you all the potential insights you need to know regarding the game and the DLC characters.