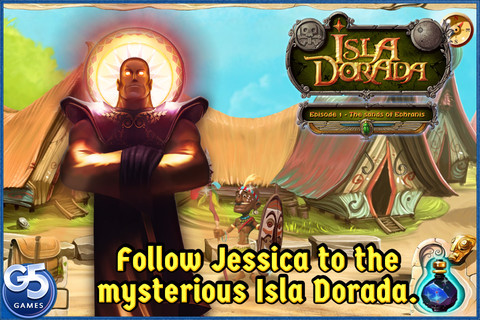 I thought that the duct taping of ancillary game elements that distract from the core gameplay was reserved for triple-A games like the animal murdering of Tomb Raider or pretty much anything in Assassin’s Creed 3 that didn’t involve assassination. Then mobile games got into the act when Special Enquiry Detail: Engaged to Kill threw excessive backtracking and overly elaborate puzzles to distract me from finding a serial killer—but that’s another review. Sometimes I want a game to find its core gameplay and stick with it.

So even though I’m not a big fan of the hidden object game genre, I was delightfully surprised by G5 Games’ Isla Dorada- Episode 1: The Sands of Ephranis. The game is 95% finding hidden objects through various stages and it does the hidden object game well while throwing in an interesting story. A few puzzles placed around the island are organic and make use of the key objects found during the levels. The hint system flows well to locate objects or stages without being intrusive. The voice acting, music, and visuals are aesthetically pleasing for the setting.

Playing as archeologist Jessica Pandora, it makes sense that you’ll be searching for a variety of hidden objects in an ancient Egyptian setting. But instead of just looking for artifacts and items of varying degrees of value, Isla Dorada presents a bizarre scenario. Natives and cursed beings welcome you back despite it being your first time on the island and modern day objects are popping up amid the clutter. Each hidden object game stage progresses the story provides or pieces of a magical artifact that will eventually sort this whole thing out.

So if all you want is straightforward with its levels and game play, Isla Dorada is an excellent choice to add to your iPhone or iPad.